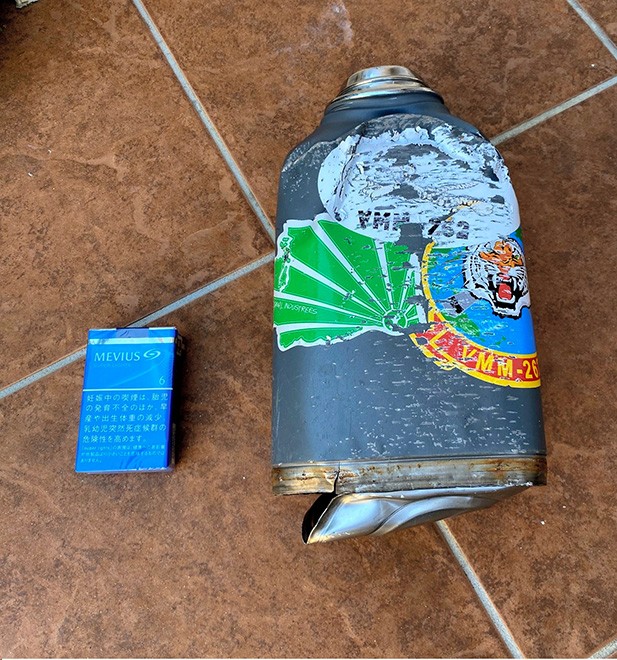 A canteen that fell from a U.S. military Osprey aircraft during a flight over Ginowan, Okinawa Prefecture, on Nov. 23 (Provided by the Ginowan city government)

GINOWAN, Okinawa Prefecture--The U.S. military is in hot water again after a canteen fell out of an Osprey aircraft over a densely populated residential area here, resurrecting safety concerns among prefectural officials and residents.

The object fell from the low-flying U.S. aircraft between 6:30 p.m. and 7 p.m. on Nov. 23, which the U.S. military reported to prefectural officials on the morning of Nov. 24 via a local Defense Ministry bureau.

No one was injured in the mishap, according to prefectural authorities.

Okinawa Governor Denny Tamaki indicated that he will protest the incident to the Japanese and U.S. governments, questioning the U.S. military’s attitude toward safety.

“Given that it occurred in the middle of a residential area, I cannot help having strong doubts about the U.S. military’s safety management system,” he said.

Tamaki also expressed displeasure with the fact that the U.S. military waited until the following morning to notify the Japanese side.

“I am afraid that U.S. military has a systemic problem with its crisis management,” he said.

The stainless-steel drinking container--30 centimeters by 15 cm--was discovered near the front gate of a home located near U.S. Marine Corps Air Station Futenma, according to local police. The Osprey in question is deployed to the facility.

Part of the canteen was crushed and there was a sign on a nearby roadside drain that was apparently struck by the object. In addition, footage from a security camera showed the canteen falling from above.

Police said a crew member of the Osprey may have dropped it accidentally while flying. They said the aircraft occasionally flies with its door open.

The resident of the house where the canteen fell said she noticed the silver canteen, which bears English letters and military squadron stickers, when she came home around 11 p.m. that night.

She said when she studied the flask the following morning, she found that part of it was damaged with pieces scattered around the scene.

“If the canteen had fallen on a person, that person might have been killed,” the woman, 63, said, adding that many people walk dogs in the area. “I have been fearful about an accident involving the Osprey as it flies at a low altitude. This accident was a fresh reminder that we are forced to live on the edge.”

In Tokyo, Chief Cabinet Secretary Hirokazu Matsuno said at a Nov. 24 news conference that the Japanese government has lodged a complaint about the mishap to the U.S. side.

He also said the government urged U.S. officials to promptly provide information after an accident occurs and thoroughly enforce measures to ensure safety of aircraft to prevent a recurrence.

Falling objects involving U.S. military aircraft are not new to residents in Ginowan.

In December 2017, a helicopter component was discovered on the roof of a nursery school. The same month, a window fell from a large and aged CH53-E helicopter to the grounds of an elementary school. No one was injured in either incident.

(This story was written by Mika Kuniyoshi, Shogo Mitsuzumi and Takero Yamazaki.)