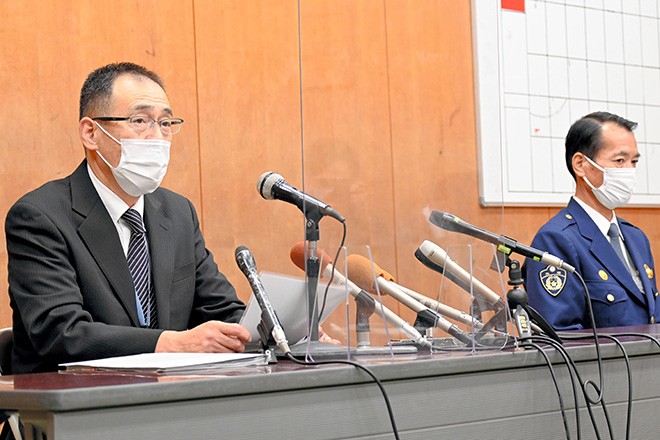 Hyogo prefectural police announce the arrest of an arson-murder suspect at a news conference in Kakogawa, Hyogo Prefecture, on Nov. 24. (Minori Oshita)

INAMI, Hyogo Prefecture--A man was arrested on Nov. 24 on suspicion of murdering his two young nephews by setting their house on fire while they slept and their parents were out, police said.

Tomeyo Matsuo, 51, who also lived in the house and had been missing since the blaze, has admitted to the murder and arson allegations, Hyogo prefectural police said.

After finding him in Osaka, police quoted Matsuo as saying: “I did it. No question about it.”

The fire started around 11:30 p.m. on Nov. 19 and burned down the two-story wooden house with about 220 square meters of floor space.

DNA testing confirmed that two bodies found in the ruins were Yuki Matsuo, 12, and his younger brother, Masaki, 7.

The cause of their deaths was acute carbon monoxide poisoning.

Traces of oil were detected in the ashes of a futon in the house, investigative sources said.

Security cameras recorded a man resembling Matsuo leaving the scene on foot right after the fire started, the sources said.

Matsuo lived in the house with the two boys, their father in his 50s and their mother in her 40s.

Matsuo is the mother’s elder brother.

In their search for Matsuo, police looked around Osaka because they knew he had lived there in the past.

Around 1 p.m. on Nov. 24, investigators found Matsuo sitting on a park bench in Osaka’s Kita Ward, about 50 kilometers east of the crime scene. He had only a few thousand yen in his possession, investigative sources said.

He has not said why he started the fire, the sources said.

Yuki, a sixth-grader at elementary school, and Masaki, a first-grader, were known in the neighborhood as “buddy-buddy” brothers.

Some neighbors said the two boys often played catch together.

A man in his 20s who lives nearby said, “I often heard their energetic voices.”

A community group leader in his 70s recalled the time when the two boys were riding their bicycles, and Masaki yelled to Yuki, “Big brother, wait for me.”

One neighbor said Yuki led a group of students to school, and he would take a longer route so that he could pick up younger children at a community center for the walk.

“He showed independence and responsibility,” the neighbor said. “I never imagined that the boys I was seeing every morning would be hit with such a tragedy.”

On the morning of Nov. 20, one of the neighbors saw the father standing alone and gazing at the ruins of the house. He appeared to be in shock and muttered, “It has come to this.”

The neighbor said, “I couldn’t find any words to say to him.”

(This article was written by Minori Oshita, Shuya Iwamoto and Ryo Takeda.)