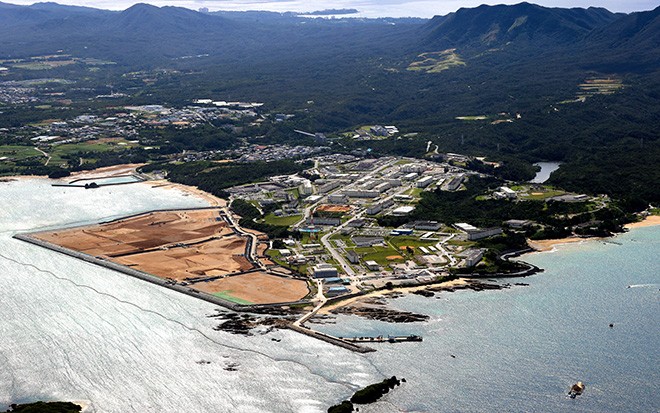 Reclaiming land in the portion in the left is under way off the Henoko district of Nago in Okinawa Prefecture for the construction of a new U.S. military base. A weak seabed was found in the right portion of the planned reclamation area. (Asahi Shimbun file photo)

NAHA--The simmering confrontation between the central government and Okinawa is about to flare up once again.

Okinawa Governor Denny Tamaki said on Nov. 25 the prefecture will reject a proposed design change in the landfill work for the construction of a planned U.S. military base when he met the ruling prefectural assembly group backing him.

The central government is expected to counter the move, likely sending the two sides into a fresh court battle, which would be the latest in the ongoing saga over the highly controversial project Tamaki has staunchly opposed for years.

He cited what prefectural officials perceive to be flaws in the measures to strengthen the weak seabed in the planned reclamation area, located off the Henoko district of Nago in northern Okinawa Prefecture, along with the steps outlined to protect the surrounding environment.

The landfill work is part of the central government’s project to build a new U.S. base that would take over the functions of U.S. Marine Corps Air Station Futenma in Ginowan, also in the prefecture.

A majority of Okinawans have repeatedly voiced opposition, through a referendum and elections, to relocating the facility within the southernmost prefecture.

The project went into motion when Governor Hirokazu Nakaima approved a request made by the central government in 2013 for the reclamation work necessary to construct the base.

But a weak seabed, described “as soft as mayonnaise,” had been discovered in the northern portion of the planned reclamation area during a drilling survey completed by 2016.

That was publicly revealed only in March 2018, after a group of Okinawans pressed for documents through a freedom-of-information request.

Still, the central government started the reclamation work in December 2018, proceeding with the 39-hectare southern portion.

In 2019, it finally acknowledged the need to carry out additional large-scale work aimed at reinforcing the shaky seabed in the 111-hectare northern portion of the area.

The central government applied for a change in the design of the landfill work in April 2020, in line with the Public Waters Reclamation Law.

About 71,000 structural pilings will be required to secure the problem area under the updated plan, raising doubts about whether such work would ever be completed because of the enormous technological difficulties involved in it.

In late 2019, the central government upwardly revised its overall cost estimate for the base’s construction to as much as 930 billion yen ($8.08 billion), about 2.7 times the initial estimate, due to the extra work required to strengthen the seabed there.

The return of land for the Futenma facility is expected to be pushed back to the latter half of the 2030s from fiscal 2022 at the earliest.