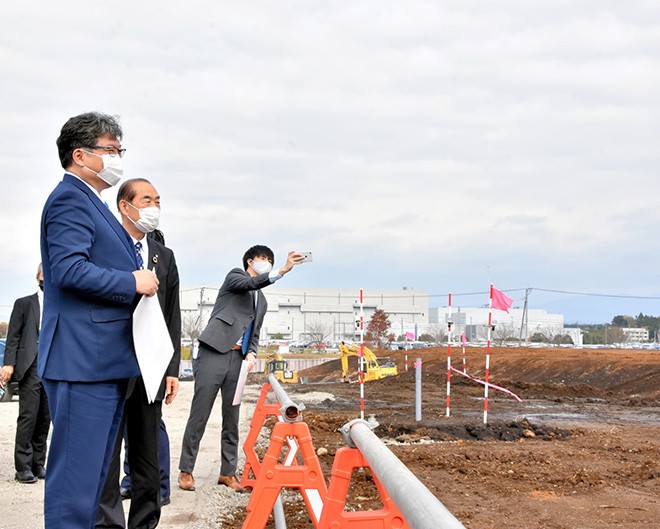 Japan is putting together a package worth about 800 billion yen ($6.9 billion) to support the domestic semiconductor industry, with the highlight being construction of a Taiwanese chip plant in Kumamoto Prefecture.

Local business leaders and researchers hope the factory of Taiwan Semiconductor Manufacturing Co. (TSMC) will resuscitate the main southern island of Kyushu into the “Silicon Island” of Japan.

In the supplementary budget to be submitted to the Diet next month, the government plans to include relevant items that will be used to establish a foundation of about 600 billion yen to support the nation’s semiconductor industry.

Most of the money in the foundation will go toward the construction of the TSMC plant.
Additional funds will be used as subsidies for research and development, and the total package will reach 800 billion yen.

Economy minister Koichi Hagiuda on Nov. 24 visited a semiconductor factory of Sony Group Corp. located next to the planned TSMC site. Sony plans to invest about 57 billion yen in the company that will operate the TSMC plant.

The foundation to support construction of the semiconductor plant will be established within the New Energy and Industrial Technology Development Organization, which falls under the jurisdiction of the economy ministry.

The TSMC plant will be the first to receive support from the foundation.

Around 400 billion yen, or about half of the total cost of the project, will be provided over the course of a few years.

The remaining 200 million yen in the foundation will provide support to other semiconductor manufacturers.

For example, Kioxia Holdings Corp., a major producer of memory chips, is planning to construct another building within its semiconductor complex in Iwate Prefecture in northern Japan.

In addition to foundation funds, 50 billion yen or so will be used as a subsidy for companies that plan to increase productivity by replacing equipment at existing semiconductor plants.

An additional 100 billion yen will be used to support research and development of chips for use in next-generation data transmission technology.

During his visit to Kumamoto, Hagiuda also met with company officials and researchers involved in semiconductors in Kyushu.

Various electric equipment companies set up production bases in Kyushu from the 1960s.

However, after reaching a peak around 2000, semiconductor production in the region fell as companies moved their facilities overseas where costs were cheaper.

According to officials of the Kyushu Bureau of Economy, Trade and Industry, chip production in Kyushu reached close to 1.4 trillion yen at its peak, but that value fell to 600 billion yen by 2013.

(This article was written by Takumi Wakai and Keiichi Kitagawa.)