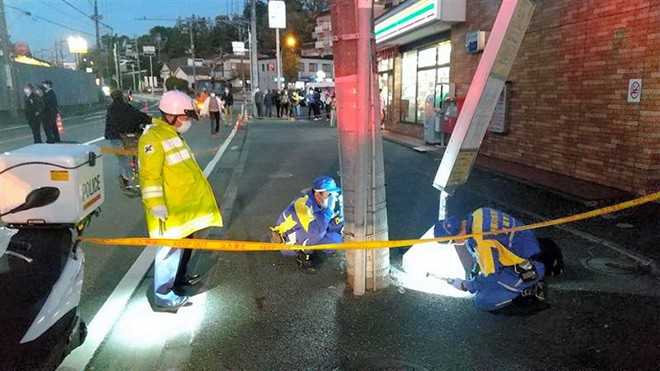 Police investigate the site where a vehicle crashed into a group of people waiting at a bus stop in Yokohama’s Totsuka Ward on Nov. 25. (Shinjiro Omiya)

YOKOHAMA--Two women were killed and another man and woman were injured in Yokohama's Totsuka Ward on Nov. 25 when a van jumped the curb and plowed into them while they were waiting at a bus stop.

Police officers from Totsuka Police Station arrested Tsugimori Sato, 71, on the scene on suspicion of negligent driving resulting in injury.

Police will investigate the case further on suspicion of negligent driving resulting in death and injury.

Skid marks, which are usually left after sudden acceleration or braking, were not found at the scene.

The man and woman injured in the accident are both in their 70s, police said. Among the five people waiting at the bus stop, only one man was able to avoid the oncoming vehicle.

Police were called to the scene at around 2:30 p.m. when they were told, “A car crashed into a bus stop and hit people waiting for a bus."

The site of the accident is a two-way street.

According to police, Sato, a resident of Tokyo’s Adachi Ward, was driving the vehicle from east to west along the stretch with a gradual right-hand curve.

After his vehicle passed through an intersection about 50 meters from the accident site, police believe it jumped onto a sidewalk, traveled for up to 50 meters and struck the people waiting at the bus stop.

The car crashed into the bus stop signpost and a nearby utility pole before coming to a stop.

Sato was quoted by police as saying, “There is no question I caused the accident and injured people."