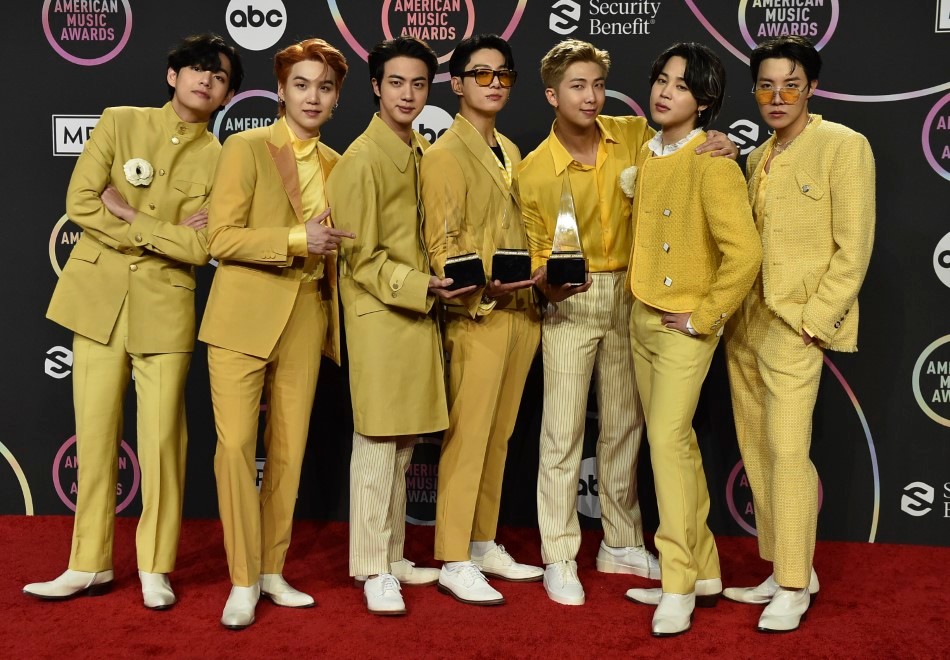 BTS poses in the press room with the awards for favorite pop duo or group, favorite pop song for ‘Butter,’ and artist of the year at the American Music Awards on Nov. 21, 2021, at Microsoft Theater in Los Angeles. (Invision/AP)

SEOUL--When K-Pop sensation BTS announced that their first in-person concerts since the start of the pandemic would be in the United States, Kim Ji-eun immediately booked a flight and hotel, praying that COVID rules would let her attend all four shows.

Permissive entry rules have prevailed so far in both South Korea and the United States, allowing Kim and other fully vaccinated, die-hard fans of BTS to see their idols in person for the first time since 2019, when they wrapped up their last tour from North America to Europe to Asia.

The seven-member group will hold four “Permission to Dance on Stage” concerts at SoFi Stadium in Los Angeles on Nov. 27-28 and Dec. 1-2.

“It’s a historic event,” Kim said ahead of her departure from Seoul on Thursday. “I’m just so happy and excited to meet BTS and other fans, and share our energy and hearts hoping for an end to the pandemic.”

A 40-year-old mother and YouTube content creator, Kim said she and her friend had to engage in a “nightly click war” to secure their concert tickets.

Waiting for her flight at Incheon International Airport, Kim had a bag stocked with fan staples such as BTS branded glow sticks and snacks, as well as pandemic-era necessities such as her vaccination certificate and COVID-19 self-test kit.

Since their 2013 debut, BTS has spearheaded a global K-Pop craze with catchy, upbeat music and dances, as well as lyrics and social campaigns aimed at empowering young people.

The band won the top prize of artist of the year at the American Music Awards for the first time on Sunday, and best pop song for their summer hit “Butter,” among other awards.

As the pandemic spread last year, the band postponed and then called off what was meant to be its biggest international tour involving nearly 40 concerts. Instead, it has held online shows.

Having the new shows in the United States--which continues to have a much larger COVID-19 outbreak than South Korea but has fewer rules on gatherings--left some fans who can’t make the international trip feeling left out.

“I was so glad to hear about the concerts, but it’s a shame for me being unable to go, especially as I had just become a fan right after the pandemic hit,” said Emily Seo, a Seoul resident who said because of her job and young baby she couldn’t risk testing positive for the virus and having to be quarantined.

Some fans have lamented on online communities that BTS didn’t opt to kick off the tour at home, while others say they are now global superstars no longer bound by commitment to local fans first and foremost.

The band’s management, Bit Hit Music, did not respond to a request for comment on its choice of concert venues, but has said the decision reflected national and regional health regulations and other conditions.

“It’s great BTS is enjoying global attention and making a big name, but I have to admit that I’m sad on the other hand because that means fewer chances for me to see them here,” Seo said.