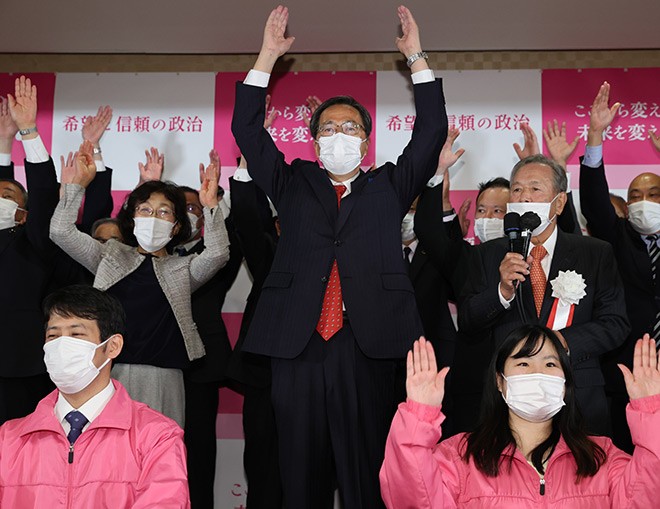 Tetsuo Saito, center, celebrates with his supporters on Oct. 31 after media reports showed he was heading to an election victory in the Hiroshima No. 3 district. (Asahi Shimbun file photo)

A group affiliated with a trucking association in Hiroshima Prefecture distributed cash to members who attended a campaign meeting of transport minister Tetsuo Saito ahead of the Oct. 31 Lower House election.

He denied that the money was paid to support Saito’s campaign, adding that the payments were made in accordance with the law and under a stipulation in the group’s regulations.

But Morii declined to specify how much was paid, how many people received the cash, and which stipulation he was referring to.

The campaign meeting was held behind closed doors at a hotel near JR Hiroshima Station on Oct. 22.

Saito, 69, a senior member of Komeito, junior coalition partner of the ruling Liberal Democratic Party, won a seat in the Hiroshima No. 3 district in the Lower House election.

The district was formerly represented by Katsuyuki Kawai of the LDP when he served as justice minister, but he gave up the seat after becoming embroiled in a vote-buying scandal.

According to sources, the attendees at the campaign meeting were company officials and people associated with industry groups in the prefecture.

“I have no knowledge of (the payments),” Saito told reporters at the prime minister’s office on Nov. 24. “It is extremely regrettable if travel expenses were paid in connection with my campaign meeting. I want people involved to give a thorough explanation.”

At a news conference on Nov. 25, Kazuo Kitagawa, vice representative of Komeito, said it is inappropriate to distribute money during an election campaign.

But he said he does not think Saito should resign over the matter because the transport minister himself said he was unaware of the payments.

At a news conference held the same day, Chief Cabinet Secretary Hirokazu Matsuno was asked if the government intends to question Saito about the campaign meeting.

Attention in the Hiroshima No. 3 district before voting day was still on the money scandal that led to the downfalls of Kawai and his wife, Anri, who had won a Diet seat in Hiroshima Prefecture in the 2019 Upper House election.

Both Kawais were found guilty of distributing cash to buy votes for Anri in that election, and they were forced to give up their Diet seats.

Closer to Tokyo, the Ibaraki Trucking Association was found to have paid daily allowances of 5,000 yen ($43.60) to its members who listened to a campaign speech given on the streets by an LDP candidate running in the Ibaraki No. 6 district in the Oct. 31 election.

Prime Minister Fumio Kishida also visited the site to speak on behalf of the candidate.