Expert: Virus could surge after peak in vaccine coverage 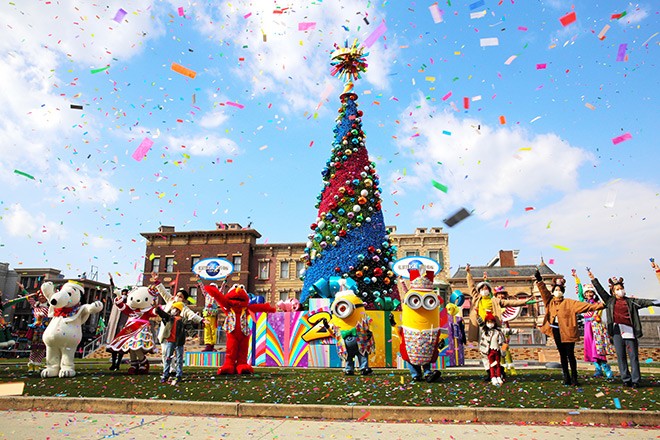 Mascots at Universal Studios Japan celebrate the appearance of a Christmas tree at the Osaka amusement park for the first time in two years. (Yoshiaki Arai)

The drop in new COVID-19 cases in Japan can be attributed mainly to the spread of vaccines, but the situation emerging overseas shows that inoculations are not a panacea, a leading expert said.

Since the COVID-19 state of emergency was lifted two months ago, new infections have remained low across the nation, even dipping into single digits on some days in densely populated Tokyo.

“Many people were basically abiding by infection-prevention protocols, and vaccinations spread rapidly from July in the 20 to 50 age groups, who were at the center of the explosion in new cases,” Suzuki said. “And that led to the sudden decrease in new infections.”

At the same time, Suzuki warned that Japan is at its maximum coverage from the vaccines, and that precautions are needed for the colder weather to prevent another surge in new cases.

Clinical tests of the vaccine manufactured by Pfizer, the U.S. pharmaceutical firm, found it reduced the infection risk by 96 percent over the first two months after the jabs, but that rate fell to 84 percent between four to six months after the shots.

Currently in the Netherlands, the number of new cases is around double the peak figure from last winter. The Dutch government is now considering strengthening some of its infection-prevention measures.

A spike in new cases has also been seen in South Korea, where close to 80 percent of the population has received jabs.

The high inoculation rate led to a relaxing of measures for customers at bars and restaurants from Nov. 1. At that time, there were only about 1,000 to 2,000 new cases in the country.

According to a study by the Tokyo Metropolitan Institute of Medical Science, foot traffic on Halloween night in major entertainment districts of the capital was up by 44 percent from the average during the last state of emergency period.

But that figure was still 21 percent lower than the congestion number on Halloween 2020.

People are still largely avoiding locations where congestion and a lack of ventilation increases the risk of infection. The continued use of face masks by a large part of Japan’s population has also helped to keep down the number of new cases.

The government is considering further relaxing restrictions on various activities by using certificates of vaccination and negative test results.

But one troubling sign is that about one-fourth of people between 20 and 39 and one-fifth of those in their 40s have not received even a single COVID-19 jab.

Given such trends, Suzuki said, “If there is a further easing of restrictions, we could face a situation similar to what Europe is going through now.”

At the same time, nations with high vaccination rates have seen a sharp decline in the number of COVID-19 fatalities. The vaccines also continue to suppress symptoms from becoming more serious.

A meeting on Nov. 25 of experts advising the health ministry concluded that measures, such as giving booster shots to residents and using vaccination certificates to restrict activities, could cut the number of new COVID-19 cases to one-third the level if none of those measures were taken during winter.

(This article was written by Akiyoshi Abe and Hiroshi Ishizuka.)