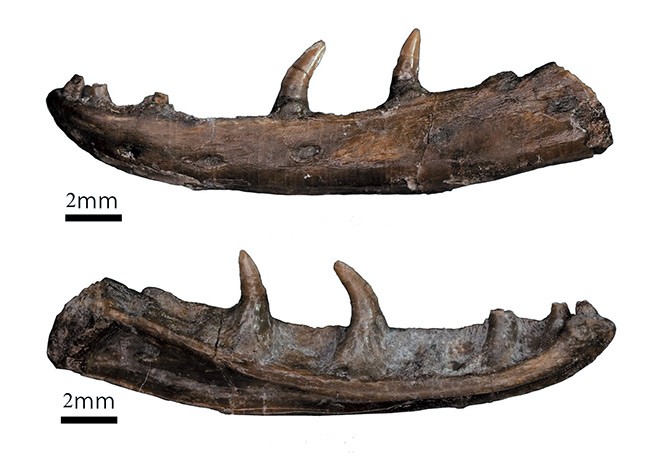 KOBE--A fossil unearthed from a 110-million-year-old stratum in Tanba, Hyogo Prefecture, represents a new genus and a new species of the monstersauria lizard group, a museum said. It is also the oldest monstersauria found so far.

The Hyogo Prefectural Museum of Nature and Human Activities in Sanda, Hyogo Prefecture, said on Nov. 25 that the jawbone fossil is the first from the monstersauria group, which includes the helodermatidae family, discovered in Japan.

The fossil, dating back to the early Cretaceous Period, was discovered in 2019. About 2 centimeters long, it was part of a lizard’s lower left jaw and features two teeth each measuring about 3 millimeters.

The double-edged sword-like teeth and the long and thin jaw led the paleontologists to determine that it was a new genus and new species.

The lizard has been given the scientific name “morohasaurus kamitakiensis.” The creature is estimated to have been about 30 to 40 centimeters long.

According to the museum, only about 10 monstersauria fossils have been reported worldwide.

A study of the stratum showed that the jawbone fossil is about 10 million years older than monstersauria found in North America, which had been called the oldest species.

The existing helodermatidae family consists of one genus and five species, all in North and Central America.

“The discovery of this fossil raises the possibility that monstersauria could have originated from eastern Eurasia,” said Tadahiro Ikeda, 43, a senior researcher at the museum who analyzed the fossil. “This is also an important resource in finding out about the migrations and origins of other creatures that lived during the same period.”

The fossil was discovered in the stratum called the Sasayama group, which stretches across Tanba and Tanbasasayama in Hyogo Prefecture.

“Himeoolithus murakamii,” the world’s smallest dinosaur egg fossil (excluding those of dinosaur birds), was also discovered in the stratum.

The team’s discovery has been published in an international academic journal.