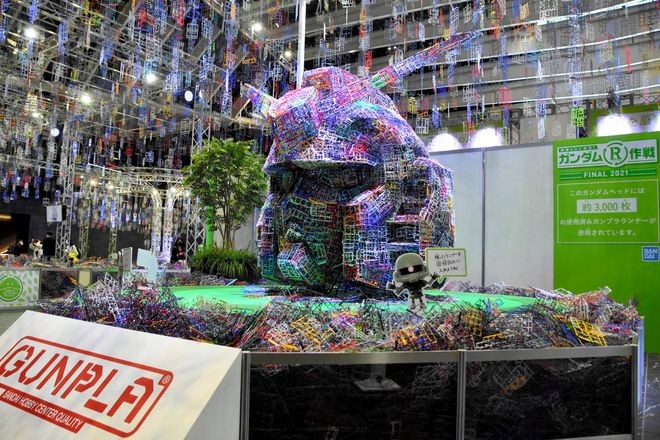 A life-size replica of the Gundam robot head is set up at an event site in Tokyo’s Shinjuku Ward. (Hiroaki Takeda)

A major toy maker is ramping up its recycling efforts so that the bleak future portrayed in the “Mobile Suit Gundam” science fiction anime franchise will never become a reality.

It is producing new kits recycled from the plastic frames discarded when consumers assemble the parts to make their model robots. Hobbyist modelers previously had no choice but to discard that type of waste, known as runners, or sprues.

“The cooperation of our fans is indispensable in keeping the increased interest (in this) from being quickly lost as a temporary trend,” said a public relations official from Bandai Spirits Co., which sells the plastic model kits. “We will continue working with them in preparation for the Universal Century (the fictional future from the Gundam series) to come.”

At an event held in the Shinjuku Sumitomo Building in Tokyo’s Shinjuku Ward on Nov. 20 and 21, visitors were greeted by a life-size replica of the head of the Gundam robot, made of 3,000 runners. The site was adorned with 100,000 runners the recycling project had amassed. All of those are to be recycled into new kits.

The event was held to urge Gunpla lovers who buy models under Operation Recycle, a corporate social responsibility campaign named in tribute after Operation V from the franchise, to return their used runners.

Bandai Spirits said it set up waste collection boxes at 190 locations nationwide and has now received roughly 1 ton of old runners over the course of a month from when the campaign started.

At the event, the company distributed free “eco-friendly” Gundam reproductions, fashioned from recycled runners. Visitors could assemble the kits there as well, attracting many Gundam lovers and families.

Since the runners come from various model kits, the colors are all mismatched, so the company has to recolor them black.

That poses various challenges for the environmental project, so Bandai Spirits is working on technology that can sort runners by color or treat them with chemicals to make them transparent. Kits using these techniques are expected to become available on the market by around 2025.

The recycling endeavor fits with some of the topics from the futuristic anime franchise, where ecological issues are a persistent theme across its numerous series. In “Mobile Suit Gundam,” people relocate to outer space after Earth becomes overpopulated.

In the latest film “Mobile Suit Gundam: Hathaway's Flash,” which hit cinemas in June this year, the protagonist engages in antigovernment activities to protect the environment.