Huge hurdles ahead for the Mizuho Financial Group 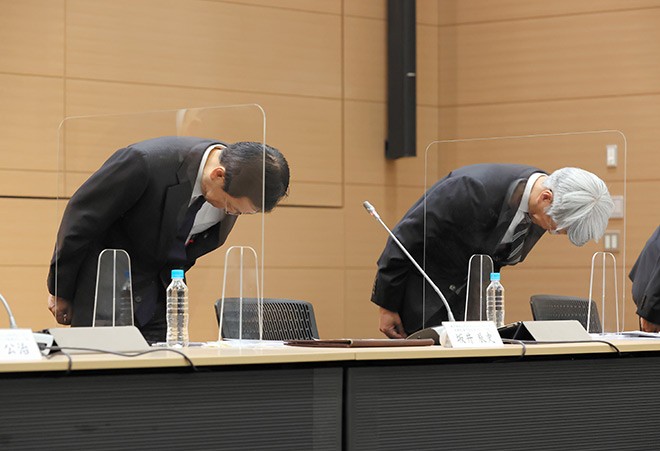 Tatsufumi Sakai will resign as president effective April 1, 2022, along with Yasuhiro Sato, chairman of Mizuho Financial Group, and Koji Fujiwara, president and CEO of Mizuho Bank.

Their replacements will face the daunting challenge of ensuring no further computer snags occur, but also revamping the corporate culture blamed by the FSA for a lack of communications to deal with problems facing the institution.

In addition, seven executives of Mizuho Bank were reprimanded with pay cuts and other measures due to their failure to adequately deal with money transfers overseas that required background checks of the recipients.

At a Nov. 26 news conference, Sakai apologized and said he was resigning as a gesture of responsibility for the computer foul-ups and other problems this year.

The Nominating Committee of Mizuho Financial Group was already facing difficulties finding a candidate to replace Sakai, according to sources.

In addition, Sato had served in a top leadership position for about a decade, so his resignation will also create a vacuum at the top.

“It will not be easy to find an individual who knows something about computer systems, but can also revise the corporate structure and still produce improved business results,” said a Mizuho executive.

A major headache is that bank officials still have no clear idea of the fundamental cause for the series of computer problems that affected countless customers.

Mizuho’s Minori computer network was developed in tandem with Fujitsu Ltd. and NTT Data Corp., among other leading computer firms, making it difficult for bank officials to grasp an overall picture of how the system works.

Even Satoshi Ishii, the senior executive officer at Mizuho Financial Group in charge of the computer system, said the system was not operating at its full potential.

Insiders noted that about 60 percent of the personnel originally in the computer system development sector are now in other positions, leaving open the possibility that technological knowhow has not been passed on to those who currently occupy those jobs.

Mizuho was created in 2000 through the merger of three banks. When computer glitches arose in 2002 and 2011, the “stovepipe” mentality that limited communications to those originally from the same bank was blamed as a major cause.

One FSA executive said that mindset is still very much in place, with the result that those in other departments were not told everything they needed to know.

(This article was written by Kuniaki Nishio and Eisuke Eguchi.)