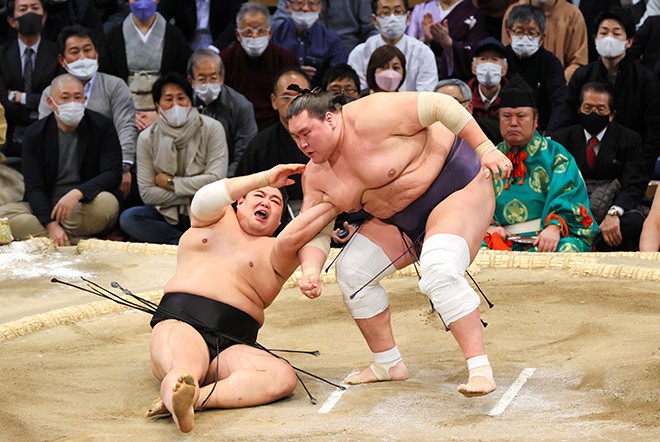 FUKUOKA--Yokozuna Terunofuji clinched the Kyushu Grand Sumo Tournament with one day remaining on Nov. 27 by defeating a lower-ranked wrestler.

Terunofuji faced off against maegashira No. 15 Abi, his closest rival. While Abi initially pushed the yokozuna to the edge of the dohyo, Terunofuji blocked Abi’s charge and threw him down, maintaining his perfect 14-0 record.

With the Emperor’s Cup under his belt for the second straight tournament, Terunofuji overcame the pressure of being the lone yokozuna. Hakuho retired in the wake of the September Grand Sumo Tournament.

Terunofuji becomes the fifth yokozuna to win their first two tournaments in sumo’s top rank and also the first since Hakuho in 2014 to win at least four tournaments in a calendar year. Terunofuji has now won six tournaments overall.

Once ranked at the second-highest ozeki rank, Terunofuji fell to the second-lowest jonidan division due to illness and injury. But he made a remarkable comeback and gained promotion to yokozuna after the Nagoya Grand Sumo Tournament in July.

This is the first time in two years for a sumo tournament to be held in Fukuoka. Last year’s tournament was held in Tokyo instead due to the novel coronavirus pandemic.