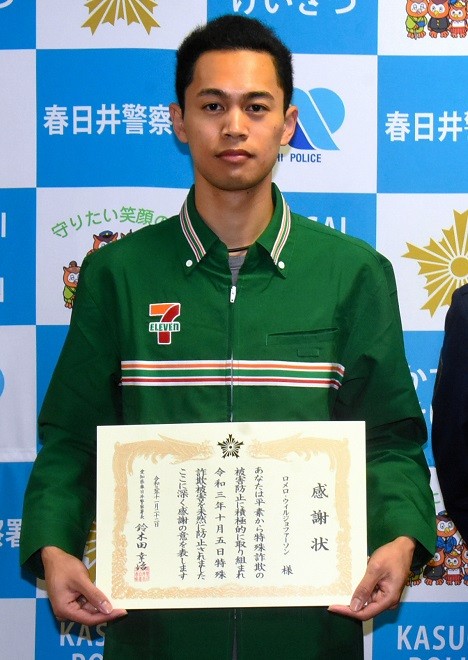 Wiljhofferson Romero poses with a letter of appreciation he received at the Kasugai Police Station in Aichi Prefecture on Nov. 22. (Yoshinori Doi)

KASUGAI, Aichi Prefecture—Aichi prefectural police have presented a letter of appreciation to a Filipino convenience store clerk who thwarted a phone scam being perpetrated against an elderly customer.

Wiljhofferson Romero, 24, who works at the Kasugai Hattacho outlet of Seven-Eleven Japan Co. in this central Japan city, received the letter from the Kasugai Police Station on Nov. 22.

The target of the scam was an 80-year-old Kasugai resident who was at the store on the afternoon of Oct. 5 with a note in his hand.

When Romero asked the puzzled-looking customer if he needed help, the man said he was at a loss because he didn’t know how to purchase e-money.

Alarmed by the high cost, Romero advised the customer to call the app administrator again, which he did.

Romero sensed something suspicious about the person on the other end of the line.

When the customer allowed Romero to take the phone, the “administrator” equivocated and demanded that Romero pass the phone back to the customer.

“This has nothing to do with you,” the man told Romero.

The customer talked to the man for a while longer and told Romero that everything was OK.

But Romero persisted and said, “It’s absolutely safer to talk to the police because it would be regrettable if this ended up being a scam.”

After he persuaded the customer to consult with the Kasugai Police Station, the jig was up.

Romero said the customer thanked him that day.

Born to a Japanese father and a Filipino mother, Romero started living in Japan when he was 10.

He mastered the Japanese language partly through the help of his friends, although he found kanji, honorific expressions and other features difficult to learn.

He said he always tells himself that, as a shop clerk, he should actively talk to customers.

“I know by experience that Japanese tend to feel frightened of us non-Japanese or find it embarrassing to talk to us,” Romero said. “But that should not be the case. They will find us just like everybody else if they talk to us.”

He explained that he simply turned those inner thoughts into actions on the day of the attempted scam.

“Foreign nationals like myself and Japanese are the same human beings,” Romero said after receiving the letter of thanks from Yukiharu Suzukida, head of the Kasugai Police Station. “We can only help each other. And I hope to help ensure our convenience store will continue to watch over this neighborhood community.”