Pigeons figure the odds to perch where safety is assured 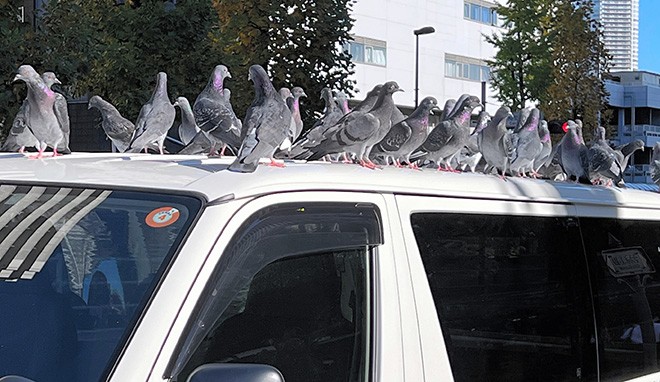 A flock of pigeons perching on a car in Tokyo’s Chuo Ward on Nov. 11 (Natsuki Edogawa)

The unusual sight of 30 or so pigeons perched on the rooftop of a parked car on a road in central Tokyo, rather than an adjacent small park, seemed like an unlikely place to congregate. But in fact it made perfect sense.

Although the road in the Tsukiji district of Chuo Ward was not overly busy on that sunny, warm day in November, the traffic flow was modest and there were pedestrians on the sidewalk.

Still, the birds were not bothered and made no moves to leave the car. The driver, who had no intention of feeding them, looked perplexed and was clueless as to why the birds picked that particular vehicle.

It turns out that pigeons take two factors into account when they pick where to perch, according to Shigeru Watanabe, professor emeritus of animal behavior at Keio University who won the spoof Ig Nobel Prize for psychology in 1995 for successfully training pigeons to discriminate between the works of Picasso and those of Monet.

One is safety. Pigeons have many natural enemies. By huddling together, they reduce the danger of each individual bird falling prey to a predator.

“If they perch on a utility cable, they risk being attacked by crows,” he said. “If they rest on the ground, they automatically become the target of cats. Pigeons may have figured out that they will be less likely to be attacked if humans are around and they found a car that offers a resting place at a safe height.”

The birds also have a flock mentality in that they follow whatever their leader does, according to Watanabe.

Another key consideration is whether food is available.

In this particular park, feeding the pigeons is prohibited, although some people ignore the rule.

“It is possible that the pigeons were waiting for people to arrive with food while they perched in a place with a low risk of being attacked,” Watanabe said.

He noted that the birds are able to recognize individual human faces.

Watanabe won the Ig Nobel award, which honors “achievements that first make people laugh and then make them think,” for showing that pigeons can distinguish between paintings by Picasso and Monet by showing 10 pictures of each to them.

Watanabe embarked on the oddball project by feeding pigeons only when they were shown paintings by Picasso, which boast clear brushstrokes in vivid colors. In the end, they pecked only when Picasso’s works were shown.

He also found that the pigeons could even tell which paintings were by Picasso even after copies of the two artists’ works were cut into pieces.

Their rate of accuracy was higher than that of humans.

Their ability to discriminate in such circumstances has drawn global attention from scientists, Watanabe said, citing experiments now under way to use pigeons to identify such things as weapons hidden in a jungle and breast cancer tumors in medical imaging.

Quite how a pigeon leader gets selected remains a bit of a mystery.

Watanabe said that unlike lions and gorillas, the birds do not have a single charismatic and dominant leader.

“A pigeon that is good at finding a place where a flock can assemble tends to play the role of the leader, but it does not mean that particular bird will remain at the top of the pecking order,” he said. “It will lose that cherished position if it makes mistakes in leading the flock.”