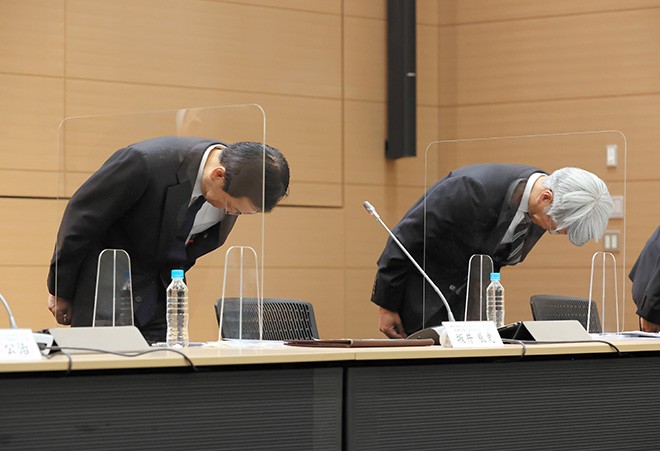 The president of Mizuho Financial Group Inc. and the head of subsidiary Mizuho Bank are stepping down to take responsibility after the holding company and the bank were slapped with a business improvement order from the Financial Services Agency on Nov. 26.

The decision on the resignations, although rightly made, came too late.

The financial group also said its current leadership will stay on until next spring, which calls into question whether its corporate management practices will be fundamentally revamped.

Mizuho Bank has been plagued by computer system glitches as many as eight times since February.

The FSA pointed out the group’s management underestimated the risks involved in the computer system and the technical specialties required and also gave insufficient attention to on-site conditions of its information technology and front-line offices.

The agency said that is evident from cuts in the expenses for maintaining the bank’s computer system and other actions.

A corporate culture in which workers “do not say out loud what should be said and only do what they are told to do” was also cited as another fundamental cause of the problem.

The FSA said the same factors were also at work behind the large-scale system glitches that Mizuho Bank suffered in 2002 and 2011. It also asserted that no self-corrective functions are in place in the group.

The Finance Ministry on Nov. 26 also issued a corrective action order to Mizuho Bank on the basis of the Foreign Exchange and Foreign Trade Law.

The ministry said the bank skipped part of the necessary procedures for preventing money laundering when it was experiencing a system glitch in September.

The actions taken by the FSA and the Finance Ministry were tantamount to declaring Mizuho as below standard as a bank, which is responsible for part of Japan’s social infrastructure, and especially as a megabank, whose moves are watched closely by stakeholders around the world.

There is an urgent need to put Mizuho’s management back on its feet from scratch.

Tatsufumi Sakai, president and CEO of Mizuho Financial Group, announced at a news conference following the administrative punishments that he was stepping down from his post to take responsibility.

But he stressed that he will continue to do his best to establish and promote recurrence prevention measures until new leadership is inaugurated.

He added that Yasuhiro Sato, the current group chairman who served as group president from 2011 through 2018, is also stepping down next year, but he said that Sato is not resigning over the issues surrounding the computer glitches.

“The matter has nothing to do with clarification of management responsibility,” Sakai said.

The neglect of the importance of the computer system and the problem of the corporate culture, which the FSA pointed out on the latest occasion, were largely cited in a report compiled in June by Mizuho’s external investigation committee.

However, Mizuho’s management members at the time were punished only with pay cuts, and computer snags ended up recurring in August and September.

The current management failed to decide to step down until the regulatory authorities doled out punishments, although it had been pointed out that Mizuho’s long-standing corporate governance practices represent one of the fundamental factors behind the entire problem.

If things were to remain the same, we could only say Mizuho would face a daunting challenge in making a new start under the same management team.

Six of the financial group’s 13 directors were recruited from the outside. They include many figures of distinction, such as a former Supreme Court justice, former top executives of big-name companies, former senior officials of a group of corporate executives and a former member of government panels.

Any appointments and dismissals of the group’s directors have to be led by those outside members of the leadership.

In doling out the latest punishment, the FSA pointed out there is malfunction not only in the executive but also in the supervisory functions of the management.

The board of directors “has never held sufficient discussions on what sort of personnel is required as candidates for the group’s CEO and other key management members,” the agency said.

Mizuho is facing a test of whether it can reform the entirety of its corporate governance practices.

The touchstone will be whether the financial group can draw on human resources, both within itself and recruited from outside, in quickly building up a new leadership structure that will allow it fundamentally to change its corporate culture.