VOX POPULI: Being kind to a dog today could well save your life tomorrow 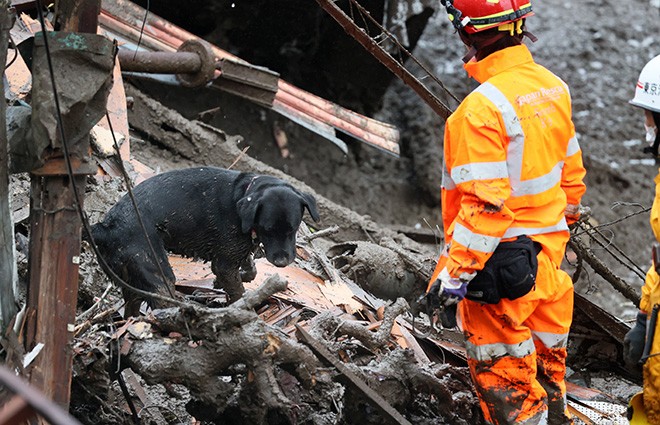 A search-and-rescue dog works in an area devastated by a landslide in Atami, Shizuoka Prefecture, on July 4. (Asahi Shimbun file photo)

He was named Taiyo (sun) by people in areas devastated by the 1995 Great Hanshin Earthquake. They wanted him to become a light that shines bright even in the darkest hour after a disaster when people feel depressed.

I saw him for the first time in news footage about a landslide that struck Atami, Shizuoka Prefecture, in July. Covered with mud, he appeared to be desperately helping locate people who had gone missing.

A male Labrador retriever, Taiyo-kun is a search-and-rescue dog.

“We train him to enjoy finding people,” says Miyuki Takaki, 30, a staff member of the Japan Rescue Association, a nonprofit organization engaged in search dog training. “Taiyo has a cheerful character. He looks for people, thinking that there must be a person willing to play with him somewhere.”

I understood that he was searching for people with gusto, rather than desperately.

About 15 search-and-rescue dogs were deployed to Atami from around the nation. They helped locate four people who had been unaccounted for.

It is said that the more a dog likes people, the better chance it has to become a good search dog. To put it the other way around, the job is tough for dogs that have a painful experience with humans.

Since ancient times, humans have been helped by canine partners, be it hunting dogs, guard dogs or guide dogs. During the novel coronavirus pandemic, many people must have been comforted by pet animals.

On the other hand, there is no end to heartbreaking incidents about abuse and neglect of pets. Humans are often troublesome and dangerous partners for animals.

“Humans are really annoying, aren’t they?” I murmured before Taiyo-kun.

Without saying anything, he flopped down on the ground. Looking at me, he wagged his tail.

I felt somewhat sorry for him. I stroked his belly as a humble gesture of gratitude for what he has done.