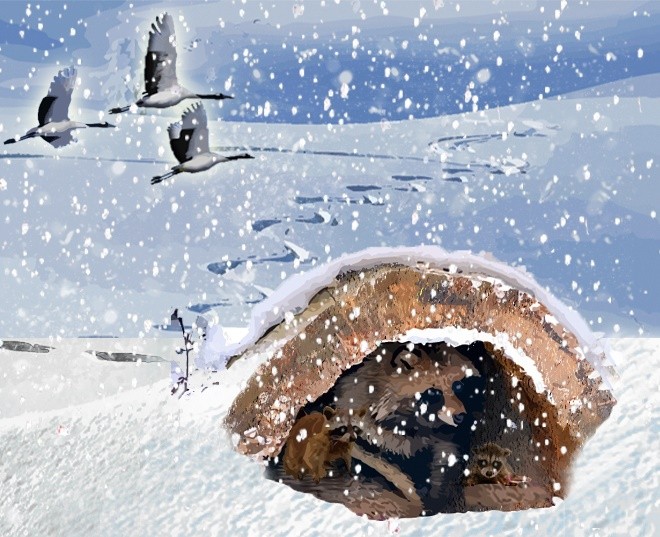 the dive of a frog moved the moon on the pond
--Angela Giordano (Avigliano, Italy)

Still wondering
if the ducks on the pool are
awake or asleep
--Lothar M. Kirsch (Kall, Germany)

that windy hayride
didn’t want to tell you
I loved the scarecrow
--Sherry Reniker (Kent, Washington)

cutting the apple crosswise
my granddaughter
makes a wish on the star
--Wilda Morris (Chicago, Illinois)

The haikuist crossed his legs under a low table covered with a warm blanket to remotely attend a celebratory meeting for a colleague at Osaka University who received the Order of the Sacred Treasure from the Emperor.

In Alabama, Laughing Waters experienced a Japanese-style yearend drinking party where participants tried to forget everything that went wrong this year. Nani Mariani couldn’t forget being timid in Melbourne, Australia. Masumi Orihara was “often drawn inside” a noodle shop in Atsugi, Kanagawa Prefecture, by her mom who was experiencing memory loss. Each time the elderly woman said it was her first time to savor such a delicious strong soup; therefore, the haikuist conceded that she “learned that forgetting is not always bad.”

warm sake
spilled all over the table--
hostess’s laughter

faceless moon
only the north wind
for company

Horst Ludwig acknowledged that the moon shining in Seattle, Washington, “does not even turn its face from or towards us. But we need celebration, and so we use any reason to experience something … relating to us from above.”

In snowy Wiltshire, England, Alan Summers mellowed while a harmonica player got lost in his music.

Germina Melius revealed her spirited soul while daydreaming in a rain-filled paddy in Castries, Saint Lucia. Hifsa Ashraf recalled a heart-warming, soul-satisfying, yet humble treat in Rawalpindi, Pakistan. Amrutha Prabhu prepared a festival sweet by blending seeds and the sap of palm trees.

father’s loneliness...
standing in this misty field
a scarecrow

Steliana Voicu tidied up her hometown of Ploiesti, Romania. Dubravka Scukanec saw the moon flicker from her home in Zagreb, Croatia; the lunar surface may have been hit by a meteor which emitted enough light to dim reflected sunlight. Orihara claimed that “it was worth the wait for the moonrise.” Swiping right on her camera screen, Payal Aggarwal viewed many attractive wedding pictures of a bride wearing an orange-colored sari.

sweeping red leaves--
how gently the moon grows
over the village

olive leaves
the shadows flicker
on a full moon

wedding day
the orange trail
riding in every frame

Kanematsu sat upright during a memorial service. With one eye on the milquetoast priest, Vladislav Hristov nodded off to sleep on a church pew in Plovdiv, Bulgaria.

A young priest
in autumn whites
his clear voice

Sunday Mass
the coziness of
a sleeping duck

Ken Sawitri kept an eye on water birds in Blora, Indonesia. Yasui kept two eyes on the road and two hands on the steering wheel.

floating downstream
a feathery soul sleeping
with one eye open

A sudden quack from the winter fog startled Francoise Maurice in a valley near Draguignan, France. Vasile Moldovan keenly perceived what migrants had to say in Bucharest, Romania. Kiyoshi Fukuzawa took pity on tired travelers who finally arrived in Tokyo.

scarf of mist
on the naked branches
cry from a duck

fog on the lake--
the voices of the geese
so clear

Terrie Jacks could do little more than turn up her collar when fraught with worry by the blowing snow in St. Louis, Missouri.

Facing the wind colored by hints of golden leaves in Sofia, Bulgaria, Tsanka Shishkova took her first step on a new adventure.

Danijela Grbelja dressed up but had no place to go in Sibenik, Croatia.

new telescope
a walk on the moon
in my silk pajamas

During the fourth week of pregnancy in Serrenti, Italy, Maria Teresa Piras sensed the rapid development of a comma-shaped embryo.

quarter moon,
eyes and heart
in that comma

Jeff Leong trapped waterfowl for fun in Malaysia, noting how “they kept coming back after we released them.” Mona Bedi admired how ducks, geese and gulls can roost on one leg while keeping the other leg tucked up into their body feathers for warmth. Rich sensed something was amiss.

sleepy waterfowl…
walking into the same trap
again and again

chilling alone
standing on one leg
a waterfowl partly asleep

napping duck
floats in a circle
of decoys

ducks and drakes
catch a quick catnap
on one leg

T.D. Ginting might hibernate in Murakami, Chiba Prefecture. Orihara noted how wintering ducks kept a subtle distance from each other, looking “like stones scattered around a pond.” Kristen Lindquist cuddled in Camden, Maine.

sleepless summer--
to sleep
or to be (s)lacking again

Kanematsu tried to guess where a lucky diver might resurface on a cold pond. Tony Williams called it a night in Glasgow, Scotland.

settling down
for the night
lochside geese

The next issues of the Asahi Haikuist Network appear Dec. 17 and 31. Readers are invited to send haiku for the incoming year on a postcard to David McMurray at the International University of Kagoshima, Sakanoue 8-34-1, Kagoshima, 891-0197, Japan, or by e-mail to (mcmurray@fka.att.ne.jp).