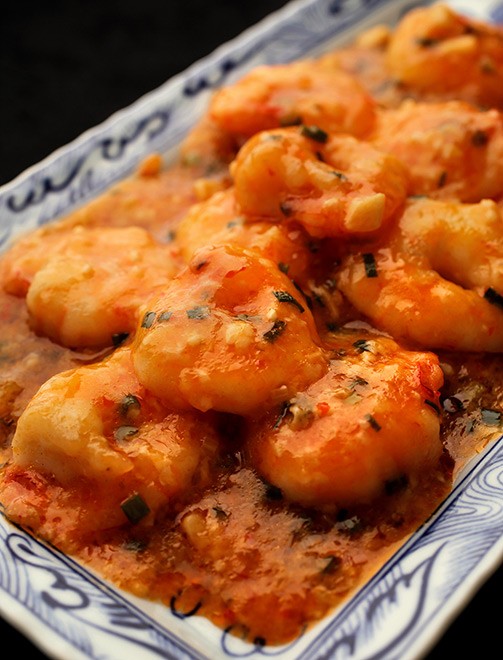 Chili shrimp might be a dish that you can’t resist ordering at a Chinese restaurant but find difficult to cook yourself.

But you’ll be able to whip up a surprisingly tasty version if you calmly follow the steps to our recipe.

Since it’s a spicy dish, “amazake” fermented rice drink is used to add rich sweetness as a hidden flavor.

Though amazake is generally regarded as a drink, Katsuhiko Yoshida, the chef who oversaw the recipe’s cooking aspect, says it is “indispensable in Chinese cooking.”

In China, amazake made by fermenting sticky rice, called “jiuniang,” is used in the classic stir-fry of thinly sliced meat and green pepper as well as chili shrimp, Yoshida says.

While our recipe requires many seasonings, mixing them all in a frying pan before you turn on the stove will prevent them from burning.

Similarly, we’ll add vinegar in the end after turning off the stove.

If you have issues with the spiciness, try reducing the amount of doubanjiang. By simmering shrimp shells and using broth, you will get to enjoy their savory “umami” in full.

1. Shell shrimp and devein with bamboo skewer or other utensils (PHOTO A). Set aside shell to be used. Place shrimp in bowl, rub in salt and katakuriko starch (both not listed above) to clean. Rinse with water and pat dry with kitchen paper.

3. Add part of base seasonings (salt, white pepper and sake) to shrimp and mix. Add remaining katakuriko starch and mix.

4. Pour 2 Tbsp oil in frying pan and sear shrimp on high heat. Turn sides and reduce heat to low and when lightly brown, remove from pan.

You can prevent failures by finely adjusting the heat level. (Video by Masahiro Goda)

Hiroshi Tachi is an expert in zymurgy and professor emeritus at the Tokyo University of Agriculture.

Add same amount of seasonings and herb vegetables as chili shrimp with 100 ml water in frying pan and turn on to high heat. Add 1 tsp vinegar. Add 1/2 tsp katakuriko starch mixed with 1 tsp water and add to pan. The chili sauce is done when it thickens. Add 3 Tbsp oil in clean frying pan and heat until steam rises. Pour in 3 beaten eggs, mix swiftly with spatula to make scrambled eggs. Serve on plate and pour chili sauce on top.

Rice “koji” amazake is made by mixing rice and water with rice koji and leaving it for more than 7 to 8 hours at around 60 degrees. It turns sweet since the amylase in the rice koji breaks down the starch into glucose. Amazake is non-alcoholic. But there is another alcoholic type also called amazake made by adding water and sugar to sake lees (“sake-kasu”).

43 select articles compiled into a book

The Gohan Lab articles have been compiled into a book.

It includes 43 recipes and arranged dishes that take you through the basics, such as simmered fish and bean sprouts tossed in dressing.

The book comes with a bonus that gives readers access to five videos of popular recipes.

The book in Japanese and titled “Chorikagaku-de Motto Oishiku Teiban-ryori 1” (Staple dishes made tastier with cooking science 1) is in A4 size and has 100 pages.

Priced at 980 yen ($8.60) including tax, it is available at bookstores and ASA (Asahi Shimbun Service Anchor) delivery outlets nationwide.