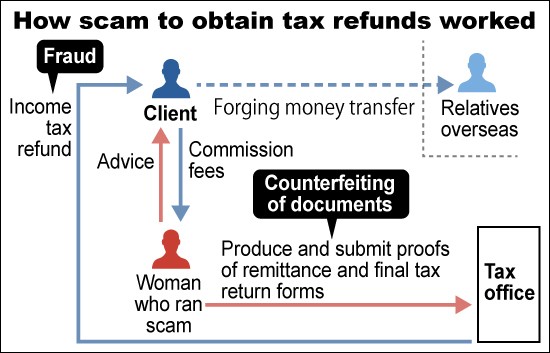 A Filipino woman caught running a tax fraud business in Japan and her 70 or so clients have been ordered to pay 50 million yen ($440,000) together in back taxes, sources said.

The woman abused tax breaks for people who send money abroad to support their relatives as dependents by forging documents so her clients could get tax refunds, the sources said.

The woman has no license to act as a tax accountant. Previously, she worked as a teacher at an English language school in Nagahama, Shiga Prefecture.

After paying her for tips on how to exploit a tax system loophole for overseas remittances to relatives, her clients submitted bogus tax forms to get refunds they were not entitled to.

People are eligible to receive income tax refunds under certain conditions when they send money to family members overseas to pay for their relatives' living or educational expenses.

To get the refunds, they must present papers, including birth certificates of their relatives to show that they are family members and proofs of remittance.

The woman falsified proofs of remittance and final income tax return forms for her clients.

Though she took about 30 percent of the income tax return refund of each client as a commission fee, she did not declare it.

Tax authorities in Osaka, Nagoya, Hiroshima and other cities investigated after they learned that at least 70 people had received tax refunds illicitly by asking the woman to forge the necessary documents.

The 50 million yen they were ordered to pay is believed to include additional penalty taxes.

The Shiga prefectural police, following a complaint by the Osaka Regional Taxation Bureau, looked into the woman’s case and arrested her in February on suspicion of violating the licensed tax account law and falsifying private documents with a seal.

She was later indicted and her guilty verdict was finalized after the Otsu District Court convicted her in July.

When foreign residents in Japan make a tax deduction claim for dependents overseas, tax officials often have difficulty determining if the information provided about the whereabouts and living conditions of these dependents is accurate.

TIPS ON TAX SCAMS NOTHING NEW

In some cases, foreign residents pocketed a large amount of tax credits by claiming that they had many family members as dependents.

As a result, following tax reforms in fiscal 2015, it became obligatory to submit birth certificates of dependents and proofs of remittance to them to tax offices.

But the woman received commission charges by forging proofs of remittance and other documents as well as having her clients file fake final income tax return documents to get tax refunds.

Tips on how to get tax refunds illicitly have been circulating by word-of-mouth in Japan's foreign residents' community for over a decade now, according to the sources.

Some experts say the existing taxation system still has a loophole that allows claimants to get tax refunds even if the relatives they send money to and declare as dependents are wealthy.

A review is under way to make working-age relatives overseas ineligible as dependents for tax breaks on income tax returns in 2023.