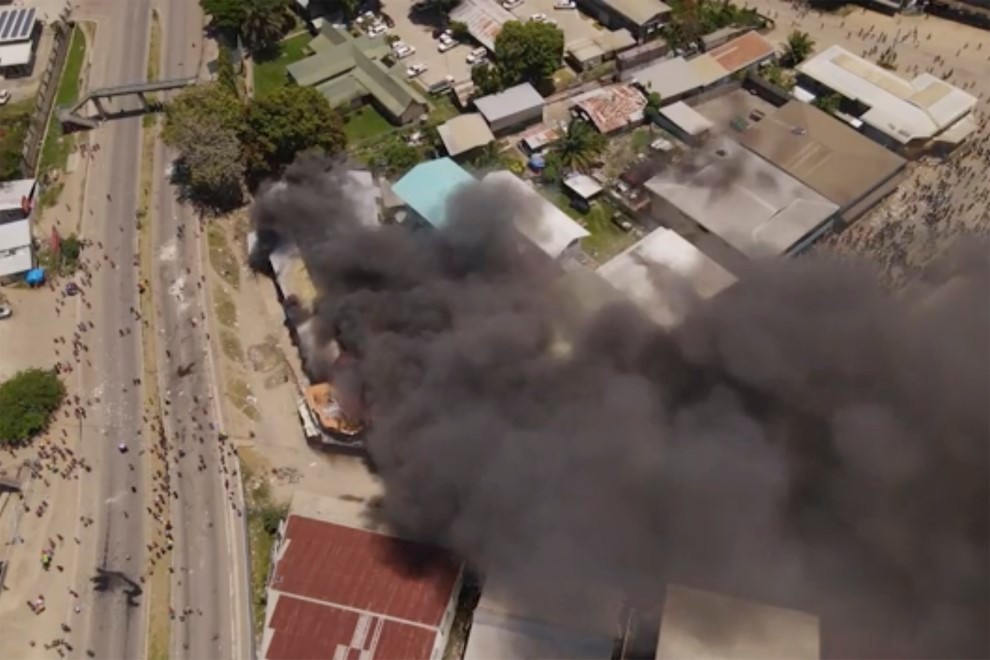 In this image made from aerial video, smoke rises from burning buildings during a protest in the capital of Honiara, Solomon Islands, on Nov. 25. (Australian Broadcasting Corporation via AP)

SYDNEY--The Solomon Islands most populous province, the source of anti-government protestors who converged on the capital Honiara last week, is unhappy Australia sent in police and soldiers at the request of the Pacific island nation’s prime minister, a provincial political aide told Reuters.

Dozens of buildings were burnt down and shops looted in the capital’s Chinatown as protests against prime minister Manasseh Sogavare turned to rioting in which three people died. The arrival of 100 Australian police and soldiers on Friday, and a contingent of 50 from Papua New Guinea, to support overwhelmed local police has largely restored calm but tensions remain high. Fiji said on Monday it would also send 50 troops on Tuesday.

Many of the protesters were from Malaita province, which has a history of disputes with Guadalcanal province where the national government is based, and which opposed the switch by Sogavare’s government in 2019 to formally recognize China instead of Taiwan. Malaita’s premier Daniel Suidani has banned Chinese companies from the province and accepted development aid from the United States.

A political advisor to Suidani said in an interview on Monday that Suidani was unhappy with the arrival of Australian police and soldiers amid a political crisis.

“Their presence on the ground gives a very strong moral boost to Prime Minister Sogavare and his government. They are here at the invitation of Sogavare - how can you be neutral?” said the advisor, Celsus Talifilu, by phone from Malaita province.

“Malaitans were surprised, we are the last ones standing for democracy in the Solomons. We were thinking Australia would see the stand we were taking,” he added.

Australia’s prime minister Scott Morrison said on Sunday Canberra was not “interfering in their democracy” and wanted to provide a stable environment so the people of the Solomon Islands could resolve the situation peacefully.

Morrison’s office did not respond to a request for comment on Monday.

The Solomon Islands national parliament will resume today, after four government members of parliament resigned at the weekend, including a minister. A no-confidence motion in Sogavare has been filed in parliament by Opposition leader Matthew Wale but cannot be debated for seven days. Another 10 government MPs would have to resign for the motion to succeed.

A spokesman from Sogavare’s office told Reuters in an email on Monday he “will not resign under pressure from political opponents that use violence to remove him”.

“The Opposition leader has every right to file a motion of no confidence given the fact that he does not have the numbers to succeed,” he added.

Sogavare last week blamed interference by unnamed foreign powers for the protests, and in a speech on Sunday said the rioting, which also targeted his residence, caused $200 million in damages and cost more than 1000 jobs.

“Arrests are already being made as investigations continue with more arrests to follow. We will not stop until we get all the people who masterminded the lawlessness to face the law.”

A night curfew was imposed on Friday.

The violence broke out after protesters from a group called Malaita for Democracy travelled to Honiara and called for Sogavare to address them last Wednesday. The protest “got out of control” as anger rose and “opportunists” began rioting and outnumbered police, said Talifilu.