Restaurants are increasingly turning to robots amid pandemic 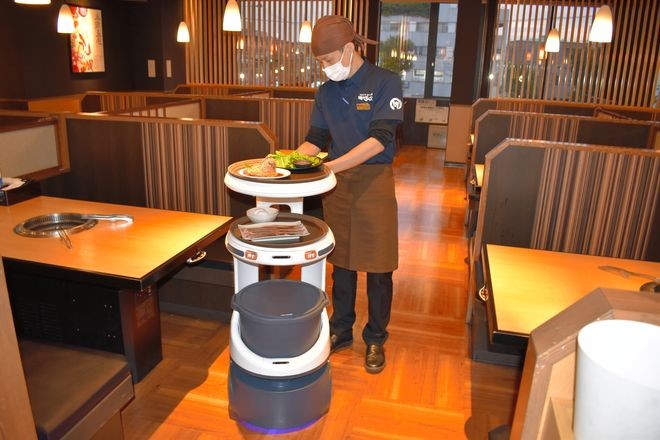 Like a scene out of a science fiction movie, two robots zoom across the floor of the Yakiniku King restaurant chain's Itabashi-Maenocho outlet in Tokyo, delivering orders to tables.

They are pre-programmed to deliver to specific tables at the grilled meat restaurant, which has a seating capacity of 156 people.

It is not the first place many would expect to encounter robots, sometimes leaving diners marveling more about their waitstaff than the food.

"I was surprised to see a futuristic scene when the robot delivered our orders," said Naoya Ishibashi, 20, a second-year college student who came to the restaurant with his friends.

But it might be about to become much more common in Japan.

Major restaurants are increasingly relying on robots like these amid the pandemic to supplement their workforces by delivering meals to tables.

The robots are expected to streamline manual tasks carried out by human staff and help improve services and productivity.

Many companies are also planning to expand their use amid a labor shortage and a growing need for contactless services.

"Thanks to the robots that play a partial role in serving food, we can improve our customer service, like by explaining how to grill meat and changing griddles," said manager Hiroya Yamashita.

All staffers need to do is put plates of raw meat onto a robot's shelves, enter the table number on the touch panel and push a button to send it on its way.

It travels at a speed of about 60 centimeters per second but automatically stops when its sensor detects a staffer or a customer in its path.

When the robot reaches its destination, it talks to the diners, saying things such as, "Thank you for waiting." It is also equipped with a weight sensor, so it knows when the plates have been removed and will then automatically return to the kitchen.

Monogatari Corp., the operator of the restaurant chain, started introducing Softbank Robotics Corp.'s Servi in March this year. It now has about 360 units at some 290 Yakiniku King and Sushi & Shabu-Shabu Yuzu-An outlets.

"We also intend to increase our productivity in anticipation of future labor shortages," said Hikaru Minami, a senior manager at the company.

The operator of the family restaurant chain Saizeriya Co. has been using Servi at its three outlets since February. Saizeriya intends to use the delivery robot at all its restaurants in the future.

Watami Co. has introduced 20 units at its 16 Yakiniku no Watami restaurants, while Skylark Holdings Co. is set to introduce the Servi at about 2,000 outlets of Gusto and other family restaurant chains by the end of 2022.

But it also has several challenges to overcome. For example, it can only be used in restaurants with hallways wide enough for the robot to move through and it cannot move up steps.

Despite those drawbacks, a representative from Softbank Robotics said it expects demand to continue to rise because restaurant operators are once again facing labor challenges since the pandemic has eased a bit.

Pudu Technology Inc. aims to promote its cat-themed delivery robots, which come in four varieties, one of which is equipped with a screen to suggest menu items.

"Contactless services have become widespread due to the coronavirus pandemic. Adding more features to robots will help them become even more commonplace," said a representative from the Chinese company.