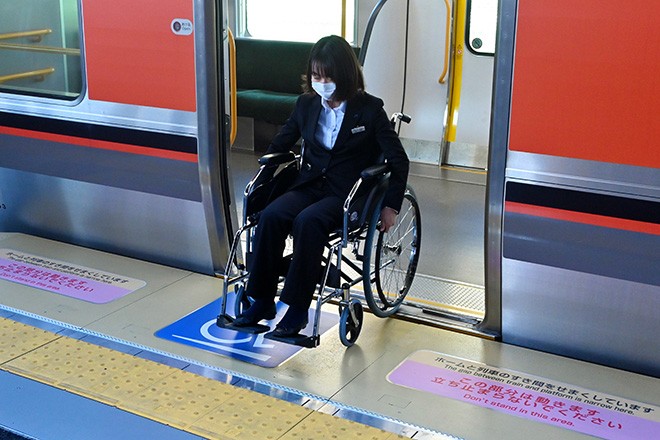 JR West starts tests of an automatic ramp at Sakurajima Station in Osaka. The photo was taken on Nov. 29. (Tomoyuki Suzuki)

West Japan Railway Co. debuted a prototype of an automatic ramp for people using wheelchairs that fills the dangerous gap between train platforms and train cars.

JR West showed the testing of the prototype at Sakurajima Station on the Yumesaki Line in Osaka to reporters on Nov. 29.

“We would like to check to see if the ramp works normally even when subjected to rain or dust, and aim to put it into practical use as early as a few years from now,” said Yuichi Shikai, chief examiner of JR West’s innovation headquarters.

The movable slope was developed to allow more passengers in wheelchairs to get on and off trains alone.

Railway station employees have often helped people in wheelchairs board and disembark by bridging the gaps with boards because widths of the gaps are different depending on the train.

If the test is successful, the slope will be the first of its kind among railway operators in Japan.

The ramp, which when not in use fits flat with the platform, is activated in under five seconds for passenger use by a sensor that is triggered by an arriving train.

After it measures the gaps in height and distance between the platform and train boarding gates, the ramp extends automatically to the side of trains.

The ramps can bridge a gap of up to 10 centimeters in height and up to 30 cm in distance.

During the Sakurajima Station test, the ramp activated to fill an approximate 4-cm high gap and shortened the 9-cm one in distance between the train doors to the platform to 3 or 4 cm.

If trains close their doors, the ramp automatically stores itself back in the platform. It also stops activation temporarily for safety if it detects a person too close to it when it is triggered for use.