Survey finds many weary of the workplace ‘bonenkai’ party 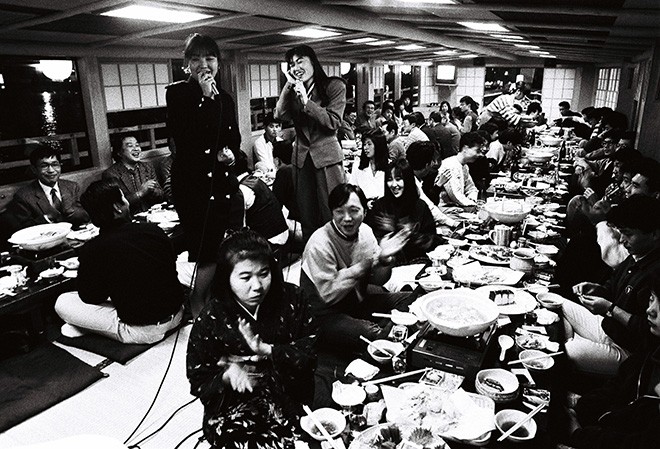 People enjoy a year-end party on a ship in Odaiba Marine Park in Tokyo in 1989. (Asahi Shimbun file photo)

With social and economic activities resuming following the lifting of the COVID-19 state of emergency in early October, many are mulling whether the traditional year-end workplace “bonenkai” parties are still worth attending.

An Asahi Shimbun survey found that while some are raring to go, many others say they are loath to do so--and not just because of the pandemic.

The survey asked readers on social media about whether they want to participate this year.

“I don’t want to attend my company’s year-end party,” a woman in her 50s said without hesitation.

She said she is relieved that the hotel she works for will not hold its usual year-end party for the second straight year.

Her 30 some colleagues were forced to take part in year-end parties before the COVID-19 pandemic, where they were expected to sing and dance on the stage and dress up in a costume.

The woman said she would cast a cold eye on colleagues who spent weeks preparing for their performances.

“They were typical year-end parties of the Showa Era (1926-1989),” she recalled. “We were never allowed to skip them. When we said we don’t have much money, the company would offer discounts to make us take part.”

She said the parties were held to create a greater sense of unity among employees, but also so employees could lobby for promotions by presenting their work achievements from the past year while on stage.

“Our job requires close coordination between colleagues, so we always maintain good communication,” the woman said. “We can’t let our guard down yet, since another wave of infections could hit anytime soon. I will never go to year-end parties, even if they are resumed.”

Many respondents said they do not like workplace year-end parties at all.

Some said they do not want to attend them because they have to be careful not to be rude to other participants.

Others said workplace parties are nothing but torment.

The pandemic has also significantly changed what the parties are like. Some companies give their employees expensive bento box meals or shopping vouchers for their lunches, while others now hold the parties online.

“Drinking parties are also held online,” one respondent said. “I don’t need to worry about what others think of me even if I don’t drink. I like the casual atmosphere. I would prefer to have this style of drinking party continue in the post-pandemic era as well.”

Other respondents said they see the merits of workplace year-end parties.

“I want to take part in year-end parties,” said a high school teacher, 26, who lives in Osaka Prefecture.

He said his workload increased due to the pandemic. He now has to prepare for his online classes and brief parents on new classroom arrangements.

“I’m very busy these days,” he said. “We were also told to keep our conversations at the teachers’ room to a minimum. So, I don’t have time to speak with my colleagues.”

The man said in past year-end parties, he discussed educational philosophies with other teachers and learned new things about colleagues who usually miss drinking parties to take care of their children or elderly family members.

The man’s school has not decided whether to hold one this year.

“Year-end parties helped me extend my relationships with my colleagues, but I guess we should deny ourselves the pleasure since our students are exercising self-restraint,” he said.

MOST COMPANIES OPTING OUT

In October, Tokyo Shoko Research Ltd. surveyed companies on whether they will hold year-end or New Year’s parties and received valid responses from 8,174 firms.

Of these, 70.47 percent said they will not hold these parties, regardless of whether pandemic-related emergency measures are in place. But that figure was 94.2 percent in December last year, when new infections were surging in Japan, which suggests that more companies are opting to have parties this year.

Some local governments are also recommending holding year-end parties amid a steady decline in new infections.

According to “Bonenkai,” a book written by the sociologist Hidehiro Sonoda, it is a time-honored practice. One entry in a diary kept by a member of the imperial family during the Muromachi Period (1336-1573) describes people drinking sake and dancing wildly at a year-end poetry party and likens it to “toshi wasure” (forget-the-year party).

That party is thought to be one of the earliest year-end parties in Japan.

The tradition of workplace wining and dining, meanwhile, dates to the Nara Period (710-784). The name of the current Reiwa Era is even derived from two kanji characters used in opening remarks for a party held at a court noble’s official residence in Dazaifu on the southern island of Kyushu during the Nara Period.

The tradition has stuck, despite the stark split in opinions over the parties. One expert said the reason for its staying power has to do with the rewards garnered by people who enjoyed them in the past.

“People who let off steam or cultivate friendly relationships with others at year-end parties cannot break away from the tradition, even if they think it is outdated,” said Takayuki Harada, a professor of sociopsychology at the University of Tsukuba.

In psychology, this is called “reinforcement.” It also applies to situations like becoming a regular at a restaurant that serves delicious dishes or a frequent shopper at a supermarket that offers items at bargain prices.

Harada said as the end of the year approaches, people who have pleasant memories of year-end parties will automatically remember those memories and feel obligated.

But he said those who have no fond memories of year-end parties have no idea why other people want to hold them so desperately.

“Between the two, there is a gap that cannot be explained by reason,” Harada said.