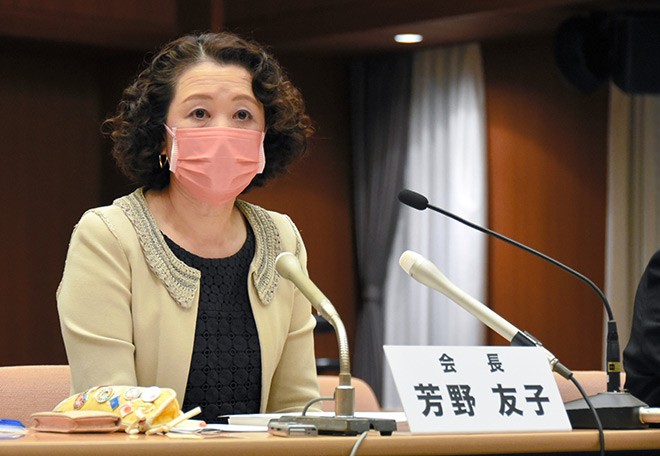 Tomoko Yoshino, head of the Rengo, the largest support group of the Constitutional Democratic Party of Japan, in Tokyo on Nov. 18 (Tamiyuki Kihara)

Rengo (Japanese Trade Union Confederation) called on the main opposition Constitutional Democratic Party of Japan to merge with the Democratic Party for the People and cut ties with the Japanese Communist Party.

Tomoko Yoshino, chief of Rengo, the nation’s largest labor group, underscored its position on a BS TV Tokyo program on Nov. 28 ahead of the CDP’s leadership election on Nov. 30.

“We would like to build up the relationship again to allow Rengo, the CDP and the DPP to cooperate and fight together,” Yoshino said.

She also said the CDP “must reconsider” an opposition alliance that includes the JCP in the Upper House election next summer.

Rengo, a key supporter of the CDP, had voiced concerns over the party’s alliance with the JCP to field individual candidates in single-seat districts for the Oct. 31 Lower House election.

“Rengo and the JCP have had different ways of thinking from the start,” Yoshino said. “It is impossible for Rengo to co-partner with the JCP even from a historical background.”

She said she “can understand the election tactic” of forming an opposition alliance in the Upper House elections in 2016 and 2019.

But she said of next summer’s Upper House election, “We must reconsider the JCP’s inclusion in the opposition coalition.”

“We helped each other with Rengo in some areas in the Lower House election,” Shii said at a news conference on Nov. 28. “I think our party and Rengo have not always been in confrontation. We hope that we can cooperate with them.”

(This article was written by Tamiyuki Kihara and Tsubasa Yokoyama.)