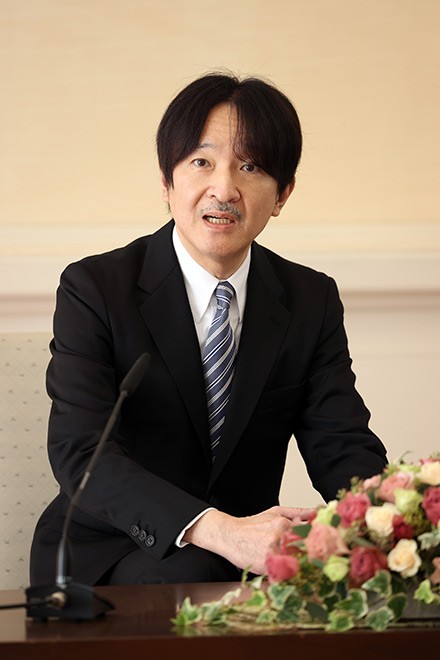 Crown Prince Fumihito responds to a question at a news conference on Nov. 25 held prior to his 56th birthday on Nov. 30. (Pool)

Crown Prince Fumihito took aim at stories in Japanese media about his daughter Mako and her marriage to commoner Kei Komuro, in a rare direct comment on the imperial family’s personal lives.

The crown prince indicated that in the future, responses may be made against media reports regarding the imperial family not based on fact.

“Be it in magazines or over the internet, words that deeply hurt anyone cannot be accepted,” Fumihito said at a news conference with the Imperial Household Agency press club on Nov. 25 ahead of his 56th birthday on Nov. 30.

Mako has suffered from post-traumatic stress disorder due to abusive comments about her relationship with Komuro, the Imperial Household Agency announced in October.

Fumihito added that there was a need to establish certain standards regarding such reports to determine when a response was required.

After responding to five written questions presented to him beforehand, Fumihito spoke about magazine and internet reports about his eldest daughter and her marriage to Komuro that were not based on facts.

Until now, Fumihito had never spoken out against or denied any magazine reports about himself or his family or comments posted to social media that he considered false.

When asked why, the crown prince explained that “it would require a tremendous amount of work.”

He said there was the concern that if he pointed out discrepancies in an individual report, all the other points in other reports that were not mentioned might be considered accurate.

He said it would be extremely difficult to point out exactly which reports were accurate and which parts of others were incorrect.

While Fumihito may have made the comments because of the media coverage surrounding Mako, he was also clearly concerned about similar media attacks occurring in the future against his other daughter, Princess Kako, and his son, Prince Hisahito.

Most of the questions to Fumihito regarded Mako and her marriage to Komuro.

The crown prince revealed that it was his decision to have Mako forgo any of the traditional imperial family ceremonies normally conducted when a female member of the imperial family marries.

He said his decision was based on the fact that the “financial problems” between Komuro’s mother and her ex-fiance had not yet been resolved.

The resolution only came after the marriage when Komuro handed over 4 million yen ($35,000) to the ex-fiance.

Fumihito also apologized to those who may have been affected because the lack of ceremonies may have given the impression that such events are not important.

Touching on a report Komuro released in April regarding what lay behind the financial problems, Fumihito said he did not find it convincing enough to put all of Komuro’s past matters behind him.

He added that he felt it would have been better if Komuro had responded to questions at a news conference he held jointly with Mako on Oct. 26.

IMPERIAL FAMILY LUMPED IN WITH CELEBRITIES

The couple only said a few opening remarks and left written responses to questions submitted beforehand. They did not take any questions from reporters who had gathered to meet them.

Hideya Kawanishi, an associate professor of history at Nagoya University, said Fumihito’s comment about the need for standards to respond to media reports may have been caused by the changes in the way the media has treated the imperial family brought about through the internet.

Kawanishi, who has conducted research on the imperial family, said since the Heisei Era (1989-2019) imperial family members have been treated more like celebrities and have become subject to gossip reports or targets of public criticism.

The internet has only made comments about imperial family members more radical, he added.

Kawanishi said the Imperial Household Agency should more aggressively transmit information about imperial family members to not only counter public criticism, but also to make the public feel like they know more about the imperial family.