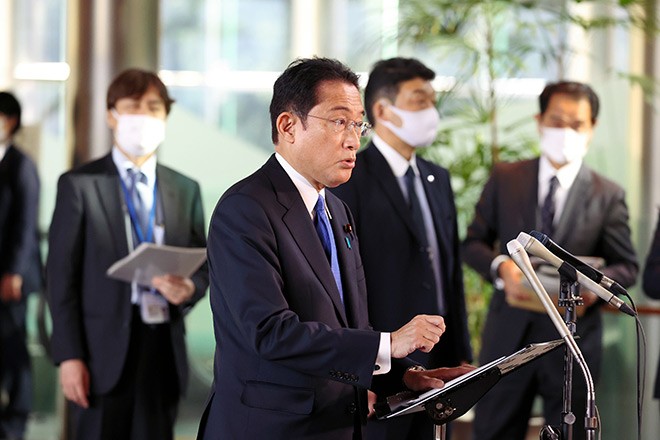 Prime Minister Fumio Kishida answers questions from the media at the prime minister’s office about new border control measures in response to the emergence of the Omicron variant on Nov. 29. (Koichi Ueda)

Japan moved quickly to suspend entries of foreign nationals compared to its past border control decisions in response to the new Omicron coronavirus variant spreading in many countries.

The government appears to have heeded the political lesson learned by the previous administration of Yoshihide Suga, which came under heavy criticism for being too reactive with its border control measures.

The Suga administration came under fire for only implementing measures after the fact rather than moving pre-emptively to stem the spread of the novel coronavirus from overseas.

Other countries are also strengthening their border measures to deal with the new variant, although it remains unclear whether this latest move will contain it.

Just after midday on Nov. 29, Prime Minister Fumio Kishida announced his government’s response to the Omicron variant to reporters at the prime minister’s office, which included banning new entries of foreigners.

He said if people said that the situation (surrounding Omicron) was still not clear and that he was too cautious, “Only I am accountable to such criticism.”

According to a senior official from the prime minister’s office, Kishida emphasized accountability because he is seeking understanding from businesses, which were expected to react negatively to the new measures.

The government had relaxed restrictions on Nov. 8 for new entries, including short-term business travelers and technical interns.

Just after South Africa made public the emergence of the new variant on Nov. 25, the Cabinet decided on Nov. 26 to require people arriving from six African countries to quarantine in government-designated accommodations during their first 10 days in Japan.

By the end of the day, a senior official from the prime minister’s office touted, “We quickly collected information and dealt with the crisis.”

But online criticism began to mount, with many insisting that a 10-day quarantine is too short.

“In principle, we are not accepting entries of foreign people,” he explained to reporters on Nov. 27.

The next day, he tweeted, “Apart from some exceptions, we are not accepting the entry of foreigners.”

But even that did not assuage public concern about the new variant. Eventually, the government announced the suspension of all new entries of foreign nationals.

Kishida cares deeply about public opinion on the matter because of the “lesson” of the Suga administration. Public approval ratings for Suga’s administration plummeted because of his slow policy response to the Delta variant.

Sources close to the prime minister said the administration is being “naturally mindful” that the previous government was criticized for being too “reactive.”

Next summer’s Upper House election also appears to be behind Kishida’s quick decision.

“How we respond (to Omicron) could directly impact the results of the Upper House election,” a senior official of the ruling Liberal Democratic Party reportedly said during a liaison meeting between the government and both ruling parties held just before Kishida’s Nov. 29 announcement.

At another LDP meeting, some made demands over entry permission exceptions and checks at airports.

“The public could voice concerns by saying that unless the rule is genuinely restrictive, there is no point at all,” said Masahisa Sato, an LDP lawmaker and director of the party’s Foreign Affairs Division.

(This article was written by Keishi Nishimura and Amane Sugawara.)