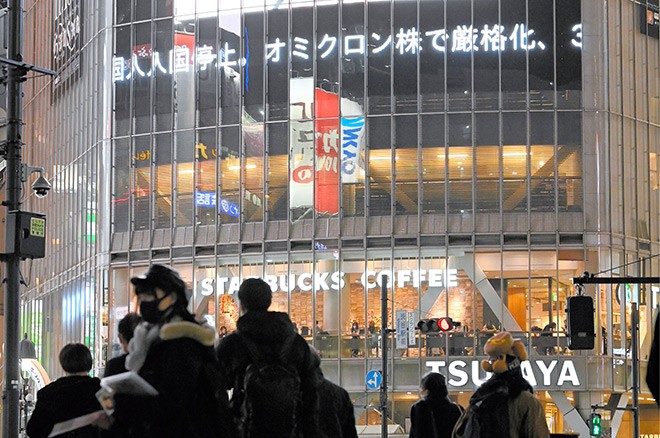 A huge video screen in Tokyo’s Shibuya Ward shows news about the Omicron variant of the coronavirus on Nov. 29. (Takuya Isayama)

People who have been anxiously waiting to accept visitors from overseas are voicing dismay at the government’s sudden decision to ban entry to foreign travelers just three weeks after partially lifting travel restrictions.

“To be honest, I’m confused,” said Kosuke Osada, an assistant section chief of the Student Exchange Division at the Tokyo University of Foreign Studies.

The government had eased entry restrictions for businesspeople, foreign students and technical intern trainees from abroad on Nov. 8.

Soon after the measures were relaxed, the university, located in Fuchu, western Tokyo, began rushing to complete procedures so 13 foreign students taking classes online could come to Japan by the end of the year.

But then the government reimposed an entry ban on foreign travelers on Nov. 30 to keep the Omicron variant of the coronavirus at bay after it began spreading outside South Africa, where it was first reported.

“The students will be very disappointed,” said Osada. “I have no words when I think about their feelings.”

About 1,000 foreign students had been waiting to enter Japan to study at the University of Tokyo as of early November.

“It’s frustrating because we were in the middle of preparing to deal with strict self-quarantine measures and coronavirus testing (on foreign visitors),” said Kaori Hayashi, an executive vice president of the university.

She also pointed out that the university has been unable to accept engineers and researchers from overseas due to the travel restrictions, causing a significant delay in its research projects.

“I understand that the government is again closing its borders as an emergency measure, but I want it to also present an outlook for reopening the country,” said Hayashi.

Industries currently facing labor shortages, ranging from agriculture to manufacturing, depend on technical intern trainees to continue operating. But trainees are also barred from entry.

Japan accepted some 190,000 new technical intern trainees from overseas in 2019, according to data from the Immigration Services Agency. The figure was 20,000 in January, but it plunged to only 13 between February and September following the government’s travel restrictions.

“Some trainees have been waiting to enter Japan for nearly two years,” said an official of an organization based in Osaka Prefecture that supervises the entry of more than 1,000 technical intern trainees. “It’s been just three weeks since they were all rejoicing at the prospect of being allowed into Japan. What troubles us most is the uncertainty over the resumption of foreign travel.”

Airlines also expressed dismay at the new entry ban, which took effect just three days after the government increased the daily quota of entrants from 3,500 to 5,000.

“We have no choice but to limit the number of reservations to deal with a drop in the quota,” said an official from Japan Airlines Co. “Some travelers planning to return to Japan at year’s end may face difficulty booking their flights.”

After the news about the new travel restrictions broke on Nov. 29, staff at the Narita Airport quarantine office were busying responding to inquiries from people who want to know if their family members returning from overseas can enter the country.

The office, which is overseen by the health ministry, said it is bracing for travelers returning to Japan.

A 40-year-old American who lives in Seattle landed at Narita Airport with his Japanese wife in the afternoon on the same day. He said he was very fortunate because he would have been unable to enter the country had he left the United States just a day later.

“It’s an abrupt decision,” said a staff member waiting at the airport’s arrival lobby to pick up students from overseas. “We don’t have enough time to deal with the new entry ban, which takes effect only a day after it was announced.”

He said 28 foreign students are scheduled to arrive in Japan on Nov. 29. A 28-year-old Bangladeshi student said he was relieved he made it into the country before the measures took effect.

The staff member said some foreign students are due to arrive in Japan on Nov. 30, a day after they boarded flights from their home countries.