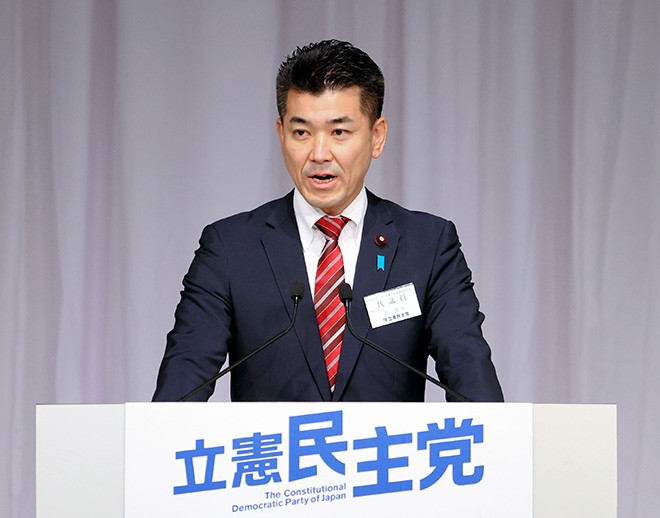 Kenta Izumi speaks at a gathering of Constitutional Democratic Party of Japan lawmakers on election day on Nov. 30. (Wataru Sekita)

Kenta Izumi was elected on Nov. 30 for the long-standing challenge of turning around the fortunes of the main opposition Constitutional Democratic Party of Japan.

Izumi, 47, the party policy chief, was the top vote-getter among four candidates but did not gain an outright majority in the first round of voting by CDP Diet members, local assembly members and supporters.

However, he was the clear winner in the run-off against Seiji Osaka, 62, a former CDP policy chief.

The other two candidates were Junya Ogawa, 50, and Chinami Nishimura, 54.

For success in that poll, he will have to reinvigorate a party that lost 13 seats in the Oct. 31 Lower House election.

Yukio Edano, who resigned as party president after the election letdown, established the original CDP and was the only party head until now.

Izumi was among members of the Democratic Party for the People who joined the CDP last year. He also ran against Edano in last year’s party leadership election but lost.

One issue that Izumi faces concerns the degree of CDP cooperation with other opposition parties, particularly the Japanese Communist Party.

Edano pushed for such cooperation to consolidate opposition votes behind an individual candidate in single-seat districts against those fielded by the ruling Liberal Democratic Party and junior coalition partner Komeito.

But the alliance with the JCP was criticized by Rengo (Japanese Trade Union Confederation), a major backer of the CDP.

Izumi indicated that he wanted to review the electoral cooperation strategy with the JCP.

However, such cooperation may be necessary in the Upper House election in which the key to success lies in how a party does in the 32 prefectures where only one seat is available.

Izumi is also expected to overhaul the party leadership structure to prepare for the extraordinary Diet session that is scheduled to convene on Dec. 6.