Japan confirms first case of infection by the Omicron variant 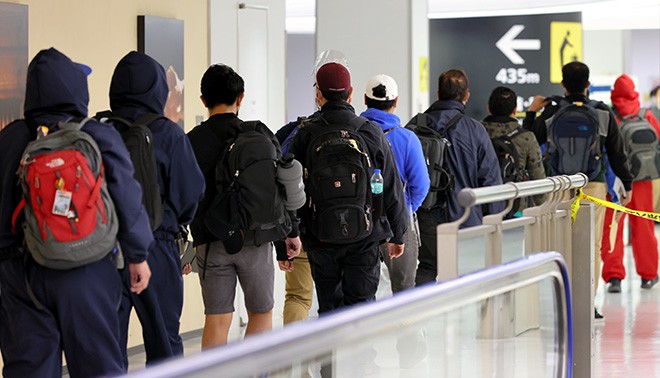 Arriving passengers head to the quarantine section at Narita Airport on Nov. 30. Japan now bars foreign travelers who departed from their countries on Nov. 30. (Tatsuya Shimada)

A passenger flying from Namibia who tested positive for COVID-19 was confirmed infected with the Omicron variant on Nov. 30, becoming the nation’s first such case, the Japanese government announced.

The man, who is in his 30s, arrived in Japan on Nov. 28 at Narita Airport with two family members and was running a fever, according to the health ministry.

That was the same day the government expanded the list of countries in southern Africa for bolstered quarantine measures to nine amid concerns about the potentially highly contagious Omicron variant, which was first detected in South Africa.

The man’s relatives reportedly tested negative for the novel coronavirus.

Health officials are determining whether passengers seated in two rows directly in front of and behind him came in close contact with the patient.

The National Institute of Infectious Diseases (NIID) in Tokyo confirmed the infection by Omicron through genome sequencing.

Health experts have warned that Omicron, with about 30 mutations in the spike protein, may be potentially more transmissible than prior variants and render vaccines less effective against it.

The NIID named the new strain the “variant of concern,” the highest level of alarm, on Nov. 28.