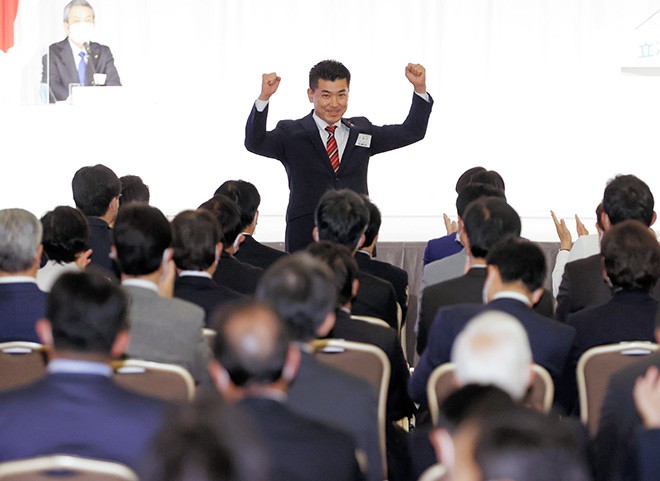 Kenta Izumi celebrates after he is declared the winner of the Nov. 30 party leadership race for the Constitutional Democratic Party of Japan. (Wataru Sekita)

An Ezo brown bear (Ezo higuma), a Steller's sea eagle (owashi) and a western lowland gorilla were among the tough, stalwart critters I saw at the Ueno Zoological Gardens in Tokyo on Nov. 30.

Going from one enclosure to another was a totally captivating experience.

But the zoo is not the only place where ferocious beasts and rare animals are to be found.

The book "Nagatacho Dobutsuen" (Nagatacho Zoo), published last month, offers a vivid portrayal of denizens of the political community. The author, Shizuka Kamei, 85, is a veteran politician who retired four years ago.

Kamei pulls no punches in discussing 100 politicians he became acquainted with during his 13 consecutive terms in the Lower House.

Weaving in some hitherto-untold episodes, he depicts the insatiable lust for power and the unrelenting toughness of these seasoned officeholders.

The Constitutional Democratic Party of Japan (CDP) on Nov. 30 elected the youthful Kenta Izumi as its new party leader.

"I am the new 47-year-old captain," he said, introducing himself in his victory speech. "But I am not too young (for the job)," he asserted, noting that his predecessor, Yukio Edano, was around that age when he made his name as chief Cabinet secretary, and so was Ichiro Ozawa as secretary-general of the Liberal Democratic Party.

Awaiting the new leader ahead are a pack of toughies, their maws open.

There are big shots, like tigers, thoroughly familiar with the taste of power; old "tanuki" (badgers) fully versed in political machinations and trickery; and even a crocodile lover.

"One must emulate both the fox and the lion, because a lion cannot defy a snare, while a fox cannot defy a pack of wolves," stated Niccolo Machiavelli (1469-1527) in "The Prince."

With the Liberal Democratic Party continuing to dominate politics, what we need today is a capable opposition party that can challenge the wrongs of the ruling party and outmaneuver it on policy matters.

And for that, both the slyness of the fox and the might of the lion are needed.

According to Izumi's official website, his family of five resides in Kyoto with their pet rabbit.

Let's see how capable he will prove to be in Nagatacho, the seat of Japanese politics, and a jungle teeming with animals that are experts at intimidation.