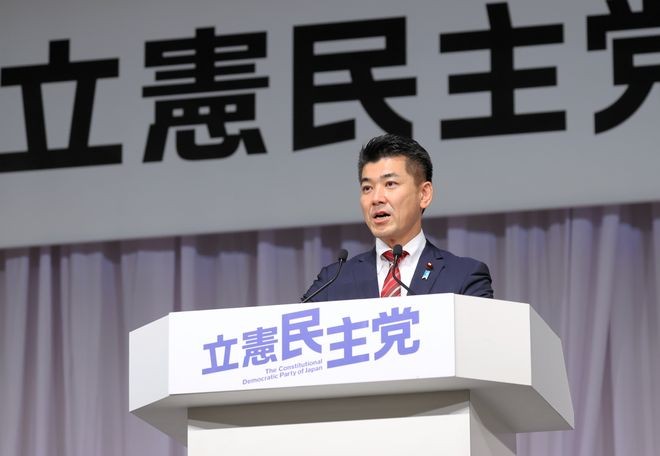 As the successor to its de facto founder Yukio Edano, the Constitutional Democratic Party of Japan on Nov. 30 elected policy chief Kenta Izumi, the youngest of the four contenders for the post and a former member of the Democratic Party for the People.

The choice of Izumi as the party’s new leader reflected the CDP’s hopes of being able to present a fresh image and expand its support base.

After winning the run-off against former policy chief Seiji Osaka, Izumi told a news conference, “We are a party that works for the people” and “this party conducts people-centric politics at their eye level,” repeatedly stressing the word “people.”

But for the CDP to learn from its latest Lower House election mauling and come to be recognized by voters as a viable alternative, mere words will not do. Only steadfast action will lead to tangible results.

Izumi has taken on the onerous responsibility of steering the party.

In his first task of assigning party positions, Izumi called for party unity and indicated his intention to appoint all his three campaign rivals to executive posts.

He needs to live up to his campaign pledge to fill those posts without a gender bias and in equal numbers, seeing as gender equality was one of the party’s platform planks. In preparation for the Upper House election next summer, Izumi needs to ensure the party will spare no effort in fulfilling the spirit of the 2018 law that requires the numbers of male and female candidates be as close to equal as possible.

As for the party’s relationship with the public, Izumi said he will challenge the government to be always on the side of front line personnel to reflect the small voices of needy people in government policies.

However, Prime Minister Fumio Kishida is already holding multiple “sitting in a circle” discussions around the nation, a practice he started upon assuming his office.

It will be a contest between Kishida and Izumi on demonstrating an ability to be a “genuine listener” who also gives his all to formulating policies that truly serve the interests of the people.

For Izumi to earn the public’s trust, he must improve the party’s basic mobility and build up a solid track record on resolving a host of local issues and other challenges.

The Diet will convene for an extraordinary session on Dec. 6, and the Kishida administration will face its first verbal sparring session in the budget committee.

Izumi acknowledged that one of the mistakes the CDP made in the past was to have allowed itself to be perceived as a party that only criticizes and raises objections to government policies. His attempts to erase that negative image must be the reason he now characterizes the CDP as a “policy-making party.”

However, it is also a vital function of any opposition party to vehemently challenge the administration when it errs or does something that is not above board. The checks and balances mechanism must never be allowed to regress.

The CDP has not yet started reviewing the outcome of the opposition alliance in the October Lower House election, nor has it formulated a campaign strategy for next year’s Upper House election.

The opposition alliance was first formed for single-seat constituencies in an Upper House election, and proved reasonably successful in 2016 and 2019. It is obvious that multiple opposition candidates running in single-seat districts can only benefit the ruling party.

While the Democratic Party for the People and the Japanese Trade Union Confederation (Rengo) are seeking to review their ties with the Japanese Communist Party, the JCP takes the position that its agreement to “offer limited cooperation from outside the Cabinet” still holds throughout the term of current Lower House legislators.

Izumi’s caliber will be tested on the choices the CDP can offer to the voting public as the leading opposition party.