Omicron case prompts call for all passengers to self-quarantine 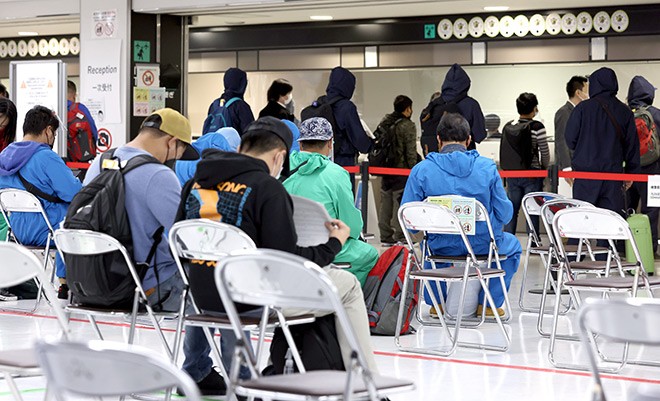 Arrivals at Narita Airport on Nov. 30 are asked if they stayed in certain countries. (Tatsuya Shimada)

The health ministry has contacted and asked all 70 passengers on the same flight as a Namibian diplomat infected with the Omicron variant to stay at home or in accommodation facilities for 14 days.

If they do not respond to health queries and location checks on ministry-required smartphone apps, their names will be made public, officials said.

Health officials were able to contact all of the passengers by Nov. 30.

One had developed a fever but tested negative for the novel coronavirus. The others said their health conditions were normal, according to the officials.

A positive test result of a passenger at an airport in Japan usually leads health officials to identify and contact passengers seated in the two rows directly in front of and behind the infected traveler.

But with the heavily mutated Omicron variant causing jitters around the world, health officials expanded the definition of “close contact” to all passengers on the flight from Namibia via a third country carrying the infected individual.

The Namibian diplomat who arrived at Narita Airport in Chiba Prefecture with two family members on Nov. 28 was confirmed as Japan’s first case of infection by the Omicron variant.

Upon arrival, he showed no COVID-19 symptoms but developed a fever after moving to an accommodation facility.

He received his second Moderna vaccine shot in July.

He is now being treated at a hospital while his family members, who have tested negative, are staying at an accommodation facility.

A task force comprising ministerial officials was set up under Chief Cabinet Secretary Hirokazu Matsuno on Nov. 30 after a meeting attended by six Cabinet members dealing with the health crisis.

The health ministry said people suspected of being infected with the Omicron variant will be placed in private, negative pressure rooms.