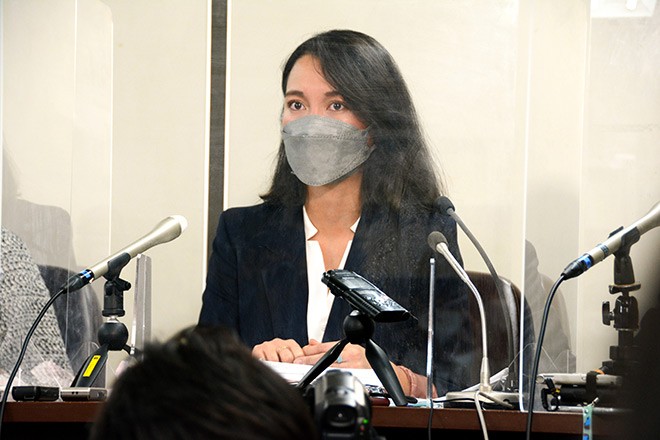 Shiori Ito speaks at a news conference after being awarded damages in a defamation lawsuit on Nov. 30. (Yuri Murakami)

The Tokyo District Court ordered a Twitter-using cartoonist and two retweeters to pay damages totaling 1.1 million yen ($9,680) to a journalist over posts that implied she had lied about being raped.

It also said that two men who retweeted Hasumi’s tweets without adding any comment must pay 110,000 yen each in damages to Ito.

The ruling said it is reasonable to regard the retweets as the two men’s own statements and expressions of support for the original tweets.

An illustration posted in one of Hasumi’s tweets depicted a woman with text saying, “Sex for a job failed miserably!!”

The court said that the tweet “communicated that Ito made a false sexual assault allegation, and it harmed her reputation in society.”

Ito had accused a senior TV journalist of raping her at a hotel. Although the criminal investigation into the alleged attacker was dropped, Ito won a landmark civil lawsuit against him in 2019.

Ito became a symbol of the #MeToo movement in Japan—but also a target of attack on social media.

She sued the three defendants in the defamation lawsuit, seeking damages totaling 7.7 million yen for spreading false information about her.

“Retweeting is easy, but it’s much more damaging than defamatory posters displayed in streets,” Ito said at a news conference after the ruling.

In 2014 and 2015, the same court gave separate rulings that said retweets should be treated as statements made by the retweeters, who have the same legal responsibility as the original tweeters.

In a lawsuit filed by former Osaka Governor Toru Hashimoto against a freelance journalist, the Osaka High Court last year ruled that a retweet carried legal liability regardless of the intension or background behind it.

The Tokyo District Court is also overseeing a case on whether clicking the heart-shaped “Like” button on Twitter can constitute defamation.

Professor Toru Mori, an expert on the Constitution at Kyoto University, said: “Many people using Twitter are not prepared for the possibility that retweeting could expose them to legal liability. If society accepts court decisions that retweets are liable for compensation, then Twitter Inc. should warn its users that they could be held legally responsible for their retweets.”