Hiroshima not convinced A-bomb victims will get fair deal 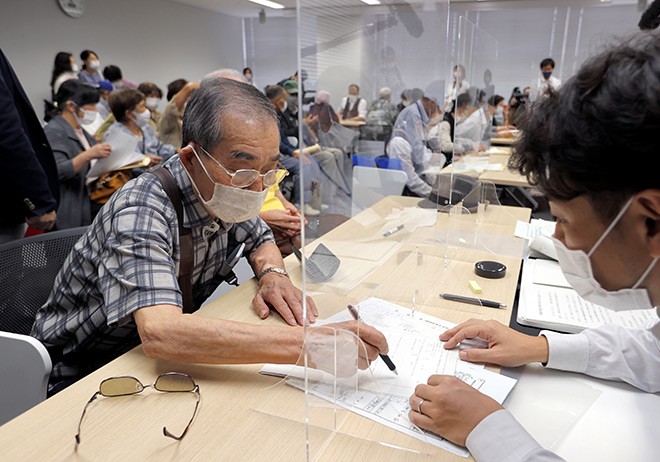 The city of Hiroshima expressed fears the central government may be moving to narrow the eligibility of people seeking atomic bomb survivors’ certificates that help victims meet their health care costs in spite of a court ruling in favor of broader redress.

Hiroshima prefectural and city officials voiced their suspicions after a Nov. 30 meeting the health ministry organized to craft new guidelines for recognizing applicants as eligible to receive the certificates and state health care benefits.

The inaugural meeting was held online, behind closed doors.

The meeting followed a Hiroshima High Court decision in July that 84 plaintiffs, who were exposed to radioactive “black rain” outside the state-recognized zone following the Aug. 6, 1945, atomic bombing of Hiroshima, are entitled to the same benefits as those given to hibakusha who were in the zone.

Upholding the Hiroshima District Court decision in July 2020, the high court said, “People who were exposed to the black rain should be recognized as hibakusha” regardless of whether they were in or outside the zone.

Before the ruling, the central government limited the recipients of state health care benefits to atomic bomb survivors who were in the zone.

The Ministry of Health, Labor and Welfare plans to hammer out the new guidelines by the end of March and enforce them from April.

During the meeting, the health ministry pointed out that the plaintiffs had four things in common: they were exposed to the black rain; their exposure was at either at their homes or surroundings: the illnesses they developed are among 11 kinds of diseases recognized by the central government to award health care benefits; and they continued to live in the same area even after their exposure to the black rain, according to the city and prefectural officials.

Ministry officials mentioned the four common points based on an announcement by Yoshihide Suga when he was prime minister last year not to appeal the high court decision. He vowed at the time that the central government will “act swiftly” to also provide redress for “people under circumstances similar to the plaintiffs.”

Even though the ministry denied, at least for the moment, that the four points will become a basis for discussion to craft the new guidelines for recognition, a senior city official expressed skepticism.

The official contended that the ministry may be trying to scale back the anticipated redress in spite of the high court ruling that ordered it to recognize black rain victims as hibakusha even if they are not suffering from cancer due to radiation exposure.

The prefectural government maintains the position that it will not come to the negotiation table to restrict conditions for the eligibility of hibakusha.

The municipal government is poised to give relief to as many sufferers as possible by examining individual cases, based on the high court ruling.

More than 1,100 applications poured in to the prefectural and city governments after the court ruling.

One of those who applied for relief in October is Sadako Sori, an 83-year-old resident of Hiroshima’s Asa-Minami Ward. She was exposed to the black rain at the age of 7.

She said she had lived without health care benefits due to the area in which she lived at the time of exposure although others in the same village were entitled to receive benefits.

“We should be recognized as early as possible because all of us are old and do not have much time left,” she said.

Officials with the Nagasaki prefectural and city governments also attended the online meeting, calling for recognition of those exposed to radioactive ash as official victims. The city of Nagasaki was leveled by atomic bombing three days after the Hiroshima attack.

(This article was written by Tabito Fukutomi, Hiraku Higa and Takashi Endo.)