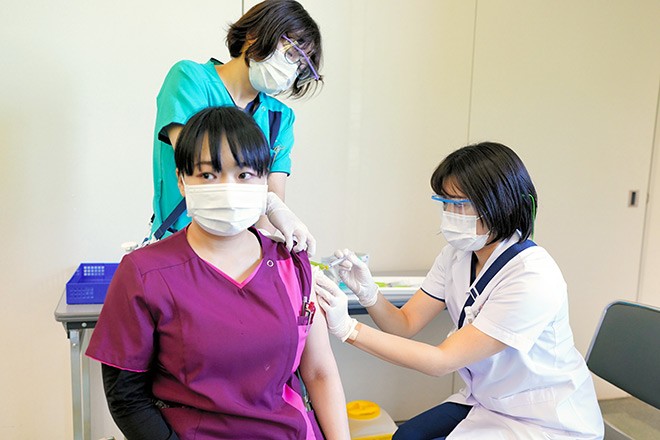 Booster shots against the new coronavirus kicked off in Japan on Dec. 1, with the first in line being medical personnel who were vaccinated in February or later.

In the morning, 18 doctors and nurses received booster shots with the Pfizer vaccine at Tokyo Medical Center in Tokyo’s Meguro Ward as members of the media looked on.

“The sixth infection wave might come," said a 33-year-old female nurse who received her booster shot. "I was worried about how many antibodies remain in my body because I was fully vaccinated eight months ago. I am glad that I was able to receive the third one.”

From now, people aged 18 or older who were fully vaccinated against COVID-19 at least eight months prior will also be eligible for the booster shots.

Booster shot campaigns at companies and universities are planned to start in March.

Hospitalized patients and medical staff at medical institutions where group infections occurred will be able to receive third shots if they were fully vaccinated at least six months prior.

The Pfizer vaccines, which were given health ministry approval for the third vaccination, will be used for the time being.

For now, those who were fully inoculated with the Moderna or AstraZeneca vaccines will be given the Pfizer jabs as cross-vaccine booster shots.

Once the health ministry approves Moderna vaccines for the third shots, they are expected to be used before the workplace vaccination efforts start.