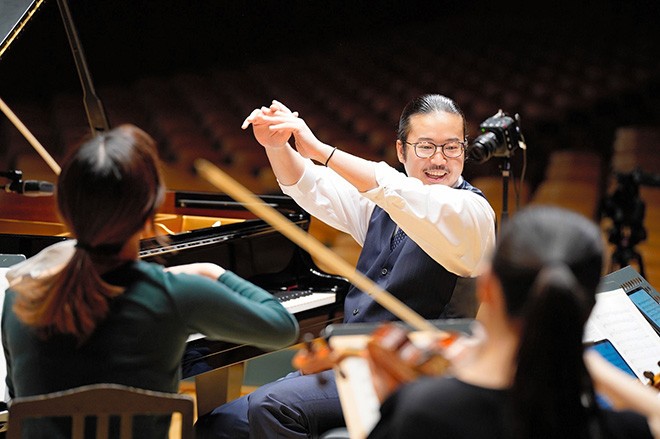 Kyohei Sorita plays the piano and serves as conductor during a rehearsal for an event organized to celebrate the establishment of Japan National Orchestra Co. on May 25. (Provided by DMG Mori Co.)

Kyohei Sorita, who recently captured the second-highest prize at the prestigious International Chopin Competition, is making beautiful music, accompanied by an unlikely partner.

The 27-year-old pianist serves as president of Japan National Orchestra Co., which he founded for young musicians with DMG Mori Co., a major machine tool manufacturer.

The two were brought together when Sorita saved the day for DMG Mori, which was born through a merger of Japanese and German companies.

In November 2018, the company’s German arm in the western city of Bielefeld was scheduled to host a concert for its clients, employees and residents.

An Italian pianist was to play Rachmaninov’s “Piano Concerto No. 2” with The Bielefeld Philharmonic.

The day before the concert, DMG Mori received a message from the pianist, who became unable to perform after falling from the stairs and suffering broken bones.

While company employees were at a loss, one sent a message to Sorita via an inquiry form on his website to ask if he could play in Germany the following day.

Sorita had just returned home in Tokyo after recording Rachmaninov pieces in Russia and Fukushima Prefecture. But he immediately booked a flight and flew to Germany.

“When I was about to serve rice, I was contacted by my manager,” Sorita later recalled during his radio show. “I hesitated a little, but I made up my mind after I was told that I would be playing a Rachmaninov piece.”

Even though he was booked at the last minute, the pianist captivated the audience, compelling Mori to give him a standing ovation. Employees in Germany also followed suit.

Overwhelmed by the response, Sorita said he had never received such a beautiful standing ovation, according to Mori.

During an after-concert party at a pizza restaurant near the venue, Sorita told the president that he wanted to establish an orchestra as well as a school to nurture young musicians.

Mori told the pianist that he was intrigued by the idea.

“He is still in his 20s,” Mori said. “I was initially baffled by his unique appearance, but he talks sense. I felt that he is trusted by promising young musicians who gather around him.”

Japan National Orchestra was established in May in Nara. The Japanese predecessor of DMG Mori was founded in Yamato-Koriyama, Nara Prefecture, in 1948.

The orchestra pays a base salary on par with newly hired DMG Mori employees to 18 young soloists who belong to it, while each soloist earns a performance fee.

It has been providing guidance to younger generations of musicians in addition to offering concerts. A rehearsal space has also opened.

Immediately after Sorita came in second at the 18th International Chopin Competition in October, Mori sent a message to congratulate him on his achievement. The pianist sent back a reply saying, “Thank you.”

Mori is looking forward to seeing Sorita, who is scheduled to perform at a triumphant concert in Nara at the end of December.

Mori sees similarities between machine tools and music, in which precise touches make a difference in quality.

“Music is a prime example of computer coding and programming that make machines interpret intentions of humans,” he said. “Playing a program written on music sheets with accuracy is exactly what machine tools do. But it is different each time, and there are also accuracy levels and temperature factors.