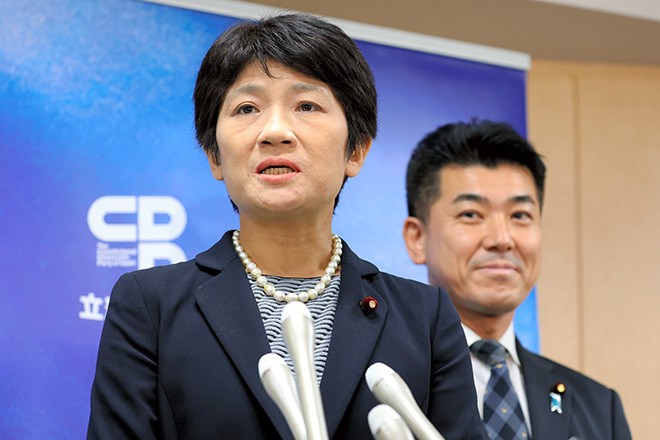 Chinami Nishimura, front, who was tapped to become secretary-general of the main opposition Constitutional Democratic Party of Japan, and Kenta Izumi, the new leader of the CDP, at the party headquarters in Tokyo on Dec. 1 (Koichi Ueda)

The main opposition Constitutional Democratic Party of Japan appointed a female lawmaker to the party’s No. 2 post, an unprecedented move by a major party.

As secretary-general, Chinami Nishimura will wield enormous clout by being in charge of day-to-day party affairs and campaign funds, among other important duties.

By naming her to the post, Kenta Izumi made good on his promise to promote women. It showed that Izumi, elected as the party’s new leader on Nov. 30, is joining forces with those who also ran in the leadership race to overhaul the party.

Nishimura, a former senior vice minister of health, labor and welfare, was one of three other contenders in the contest.

“The CDP has worked toward achieving gender equality,” Izumi said Dec. 1. “I want her to spearhead efforts toward that goal.”

Nishimura, 54, said her goal is to demonstrate that the CDP is focused on implementing policy measures for the good of the public.

Her appointment was formally approved Dec. 2 after a meeting of CDP lawmakers in the two chambers of the Diet.

Izumi is also set to appoint Sumio Mabuchi, a former construction minister and one of Izumi’s key supporters in the leadership race, as Diet affairs chief. Kensuke Onishi, a member of a group Izumi heads within the CDP, will serve as election strategy chief.

(This article was written by Kazutaka Kamizawa and Taro Kotegawa.)