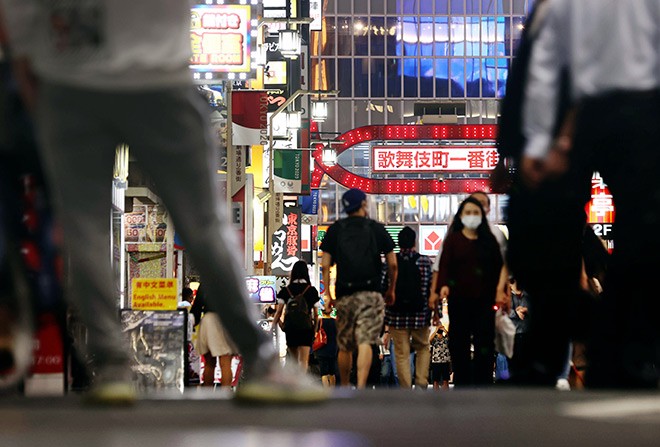 A tout stands on the streets of Tokyo’s Kabukicho entertainment district to lure customers into an establishment in June 2020. (Asahi Shimbun file photo)

The Tokyo District Court has ruled that a man who spent more than two and a half hours at a "girl's bar" is not guilty of not paying his tab because the bar overcharged him for services rendered.

The defendant, 23, was indicted on charges of fraud over deliberately failing to pay about 55,000 yen ($487) for a night of wining and dining.

In its ruling issued on Nov. 29, the court found that the man owes only 2,400 yen, saying the bill clearly contains “false” charges.

According to the ruling, the man wined and dined at a girl's bar, an establishment where female staff serve alcohol and chat with customers, in Tokyo in June last year.

The bar’s manager took him to a police station after he failed to pay the hefty bill. The man was arrested the same day.

The court examined the bar’s charging system, contents of the order slip and testimonies given by employees who were reluctant to appear in court as witnesses.

It found that the defendant ate and drank and received other services at the bar for about two hours and 45 minutes.

The court ruled that the tab also lists fees for offering the services for an extra four hours and assigning particular female staff members to entertain him for three and a half hours.

It said those additional charges are false and are not based on objective facts.

The court concluded that the defendant did not intentionally fail to pay the bill because he tried various ways to make the payment, including using his credit card and asking his acquaintances to loan him the money.