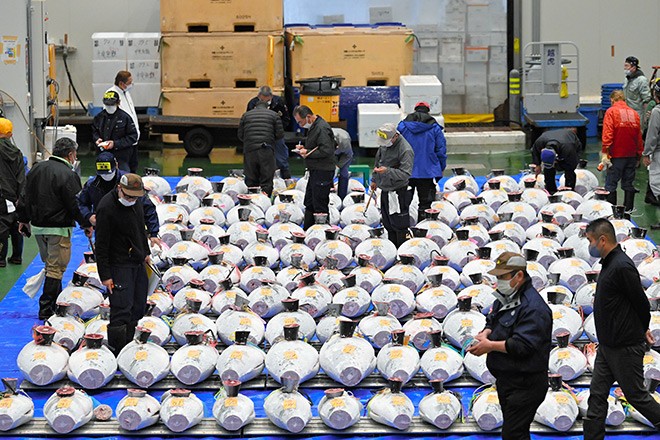 Brokers assess frozen tuna before an auction at the Toyosu fish market in Tokyo’s Koto Ward on Dec. 2. (Yosuke Fukudome)

More than 20 spectators enjoyed the first tuna auction viewing in about a year from a dedicated observation deck at the Toyosu fish market in Tokyo’s Koto Ward.

More than 1,000 tuna caught in Japan and abroad were up for auction in the market’s Fisheries Wholesale Market Building in the early morning of Dec. 2.

A group of 21 people holding reservations watched intently as traders shouted out their bids for the tuna just a few meters away from the prime vantage point. Onlookers took pictures and videos as well.

“I’m glad to be able to see such an exciting auction up close,” said a woman in her 30s who came from Tokyo’s Minato Ward with her 4-year-old daughter, who likes fish. “I didn’t have to worry too much about the deck being overcrowded.”

The tuna auction observation deck at the market had been closed since the end of last December due to the spread of the novel coronavirus.

It reopened on Dec. 2, although only up to 27 people are allowed in at a time, far fewer than the 120 onlookers normally permitted. Viewers are also required to wear face masks, have their temperatures taken and use hand sanitizer as precautions against the virus.

The Tokyo metropolitan government reopened the observation deck on Nov. 2 last year. But it shut it down again on Dec. 26 following a resurgence of infections.

Those who want to watch the auction from the deck need to make bookings in advance on the market’s website: (http://pia.jp/piajp/v/toyosushijou19/) (Japanese only)