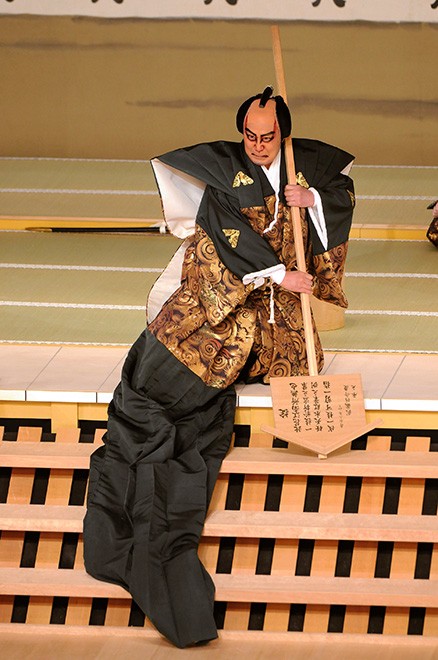 Nakamura Kichiemon performs the lead role of Kumagai Naozane in “Kumagai Jinya,” a historical play, at the Kabukiza theater in Tokyo in 2013. (© Shochiku Co.)

Celebrated Kabuki actor and living national treasure Nakamura Kichiemon died of heart failure in Tokyo on Nov. 28. He was 77.
His funeral is being arranged by close relatives.

Kichiemon had been recuperating since he was rushed to hospital for a heart attack late March 28.

The giant of the stage won acclaim not only for playing male leads in numerous Kabuki plays, particularly those in serious period works, but also as the protagonist in TV period drama series.

Kichiemon was born in Tokyo in 1944 as the second son of a renowned Kabuki family headed by Matsumoto Hakuo. His real name was Tatsujiro Namino.

When he was very young, Kichiemon was adopted by his maternal grandfather, also a Kabuki actor, who became his adoptive father.

He debuted at 4 under the stage name Nakamura Mannosuke and took over his grandfather’s stage name, Nakamura Kichiemon, in 1966.

He studied classic Kabuki plays through performances by both his biological father and adoptive father, establishing a reputation for delicately playing nuanced characters and expertly delivering his lines.

Among his famed roles in historical plays are Shunkan in “Shunkan,” Kumagai
Naozane in “Kumagai Jinya” and Benkei in “Kanjincho.”

Kichiemon widened his appeal beyond Kabuki theater by playing the lead character in the popular TV samurai drama series, “Onihei: the Crime Files,” for 28 years from 1989.

He was named a living national treasure in 2011 and a Person of Cultural Merit in 2017.

Despite a long, glittering career as one of the leading Kabuki actors of his generation, Kichiemon was 73 when he announced, “I finally convinced myself that being a Kabuki actor is my calling as I am now able to go up to the stage with a pure heart.”