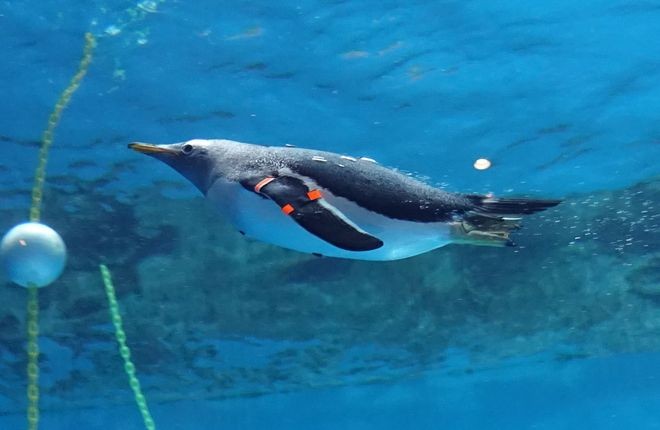 Team members carried out their penguin study at the Nagasaki Penguin Aquarium in Nagasaki. (Provided by Hiroto Tanaka, an associate professor at the Tokyo Institute of Technology)

Physicists are studying penguins and their ability to “fly” through water for inspiration to design aquatic robots that can move speedily under the surface.

A team headed by Hiroto Tanaka, an associate professor of fluid mechanics at the Tokyo Institute of Technology, used a host of camera angles to film penguins swimming and analyze their flipper movements.

With its streamlined body, the bird species is particularly suited to chasing small fish and other prey underwater. Whereas top-level athletes can swim at 8 kph or so, the speed of gentoo penguins--the fastest penguin variety--is known to reach more than 30 kph.

The penguins’ secret lies in the motion of their flippers, which resemble the wing movements of birds in flight, giving the appearance of “flying” through water. Well developed flipper and breast muscles help to propel them with ease through water--which is much denser than air.

It had been known that penguins bend their flippers slightly in a V shape when they flap left and right to move forward beneath the surface. But the members acknowledged they still have much to learn.

For the study, the research team set up 14 underwater cameras in a large display tank at the Nagasaki Penguin Aquarium in Nagasaki. Three gentoo penguins were used for the study.

Marks were made in one point at the flipper root as well as two spots at the center of the two extremities to allow the team to record the movements through what is known as 3-D motion analysis.

The findings showed penguins swing their flippers up toward their back to paddle, and then move them downward to the side of their bellies when they decide to swim forward. The flippers are bent slightly differently in these two processes.

The bodily components curved no more than 10 degrees down in the downward turn, but the upward move entailed bending them at 20-plus degrees, team members said.

To assess how the degree in flipper movement affects penguins’ swimming performance, they measured their dimensions and created their smaller models with a 3-D printer.

The reproductions were put in a tank with flowing water to collect data on how differently propulsive forces are generated by bent and straight flippers. The experiment revealed that swimming with flippers stretched out leads to a reduced power to move forward because of the energy wasted via the up-and-down motions.

Curving wings succeeded in lowering the force used in vain in the upward and downward movements, rendering it possible to swim 1.8 times more efficiently.