VOX POPULI: This taxi service is blazing a trail for areas without public transport 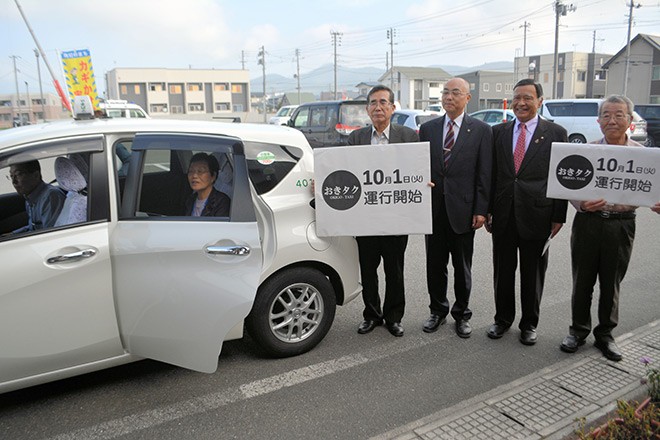 When I travel around the nation for reporting, I often hear about deficit-ridden railway lines and discontinued bus services, along with elderly residents bemoaning the difficulties of reaching their desired destinations.

I paid a visit to Nanyo, Yamagata Prefecture, when I learned that a new public transportation service is getting on track.

A taxi program is being offered exclusively for senior residents in the city’s Okigo district.

“We racked our brains figuring out how best to respond to the request that seniors, who are under pressure to surrender their driver’s licenses, should be guaranteed an alternative means of transport,” said Yuya Ochiai, 34, a city official in charge of the program, called Oki-Taku.

After local bus service was halted, residents relied on the city’s community bus service, but that, too, was discontinued in 1997.

Ever since, the Okigo district has remained in a “public transit vacuum.”

Oki-Taku charges a uniform fare of 500 yen ($4.41), regardless of distance. The service is only available to residents aged 60 or older, and destination choices are limited to 54, including hospitals and supermarkets.

Differences between the uniform fare and the actual fare run up on the meter are covered by municipal subsidies and contributions from households.

The program has been in operation for two years now and the number of customers has grown, benefiting everyone involved.

Oki-Taku will be commended by the transport ministry this month.

“In the past, I was dismayed that my taxi fare was higher than what I paid for my medical treatment, but now I can go to my doctor without worries,” said a resident.

Many people are happy that they can go out more frequently.

According to a transport ministry estimate, about 20 percent of the Japanese population lives in areas without any public transportation.

Many bus companies have been driven out of business due to the novel coronavirus pandemic.

Unless something is done, the nation’s public transit networks will only shrink further.

Problems caused by the lack of access to public transportation vary from community to community. If the variables differ in equations, so do the answers.

Still, the desire to go out is a basic human instinct. The wisdom of Oki-Taku shines.