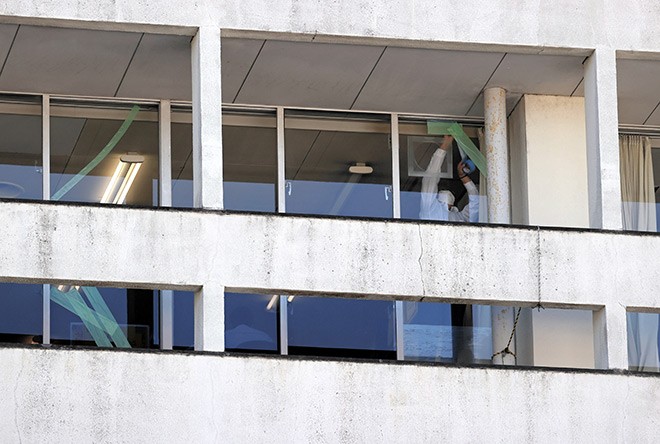 A series of morning earthquakes shook parts of Japan on Dec. 3, including a magnitude 5.4 jolt that caused structural damage in Wakayama Prefecture.

No injuries were reported.

The locations of the earthquakes raised concerns among the public that potentially catastrophic events could follow, namely an eruption of Mount Fuji or a Nankai Trough megaquake. But the Japan Meteorological Agency said seismic data recorded were not related to those possible disasters.

Damage was reported after the day’s biggest quake struck at 9:28 a.m. in the Kii Channel, registering a maximum intensity of lower 5 on the Japanese seismic scale of 7 in Gobo, Wakayama Prefecture.

The JMA said the focus of the temblor was 18 kilometers below the surface. No tsunami was observed.

Twenty-six windows were broken at the Gobo City Hall, and workers there sought shelter under desks or fled to a parking lot. A new city hall is being built at the site because the existing building does not meet the latest quake-resistance standards.

“It was the strongest quake I have ever felt,” said a city government employee who was on the first floor of the building.

The quake also caused an elevator to stop at Reimeikai Kitade Hospital in Gobo, but no patients were inside the lift at the time.

At a kindergarten in Gobo, 76 pupils wearing protective jackets evacuated the building to the schoolyard.

“I am really glad that a tsunami didn’t come,” said Yoshito Sugawara, the 58-year-old principal.

At the Kawabe Tennis Park, a Hidakagawa town-run facility in Wakayama Prefecture, the quake broke part of a window 5 meters in height and 10 meters in length on the second floor of a two-story accommodation building. Shards of glass were scattered on the floor.

“I felt the strong vertical and horizontal shaking for a couple of seconds,” the manager said. “I am now checking if there are any other damages.”

The earthquake was felt in areas from the Chubu region to the Kyushu region.

The JMA is warning residents in the hardest hit areas that aftershocks of a lower 5 intensity are possible for about one week.

Earlier on Dec. 3, a magnitude 4.1 quake with a maximum intensity of 4 struck at 2:18 a.m. in the Fuji Lakes area around Mount Fuji in the eastern part of Yamanashi Prefecture.

Five minutes later, a magnitude 3.6 tremor with a maximum intensity of 3 occurred with nearly the same epicenter.

Then, at 6:37 a.m., yet another quake hit the area with a magnitude of 4.8. A lower 5 intensity was recorded in Otsuki in Yamanashi Prefecture.

According to the Japan Meteorological Agency, the focus of that quake was 19 km deep.

The JMA has called on residents in the affected areas to be cautious of similar-sized quakes for about a week.

The third quake registered an intensity of 4 in the Kanagawa prefectural municipalities of Sagamihara, Atsugi and Matsuda, while Tokyo and the three prefectures of Gunma, Saitama and Shizuoka felt intensities of 3.

Increases in seismic activity around Mount Fuji often spark concerns that Japan’s tallest mountain could awake from its long dormancy and erupt.

The epicenter of the Yamanashi quakes was just dozens of kilometers from the active volcano.

The meteorological agency tried to quell such fears.

“The Philippine Sea Plate slides beneath the Eurasian Plate around this area, so quakes have frequently occurred there in the past,” said Shinya Tsukada, the JMA’s earthquake and tsunami observation division chief. “There is no unusual data recorded that would indicate a possible eruption of Mount Fuji.”

The quake in Wakayama Prefecture was viewed by some as a possible precursor of the Nankai Trough megaquake that has been predicted to strike off the coast from the Kyushu region to the Tokai region.

But the JMA pointed out that the scale of the Wakayama quake was relatively small and that it originated inside the Earth’s crust.

A JMA official said the agency does not think a megaquake is now more likely to occur because the Nankai Trough quake would originate around a plate boundary.