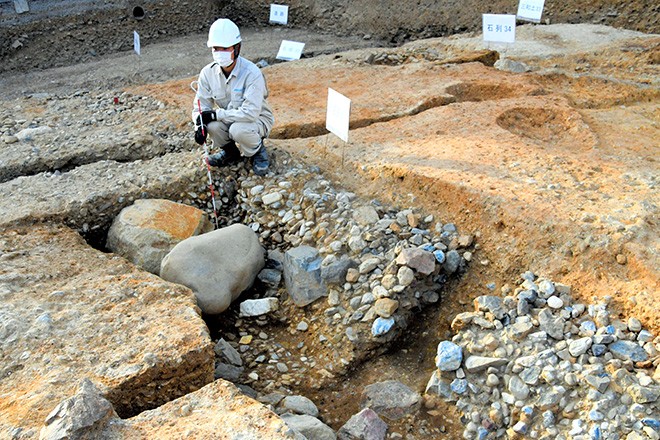 The stone foundations of Shigetsu-Fushimi Castle found in Kyoto’s Fushimi Ward. A city worker stands Nov. 4 in front of two large stones believed to have been foundation stones for the walls. (Makiko Komatsu)

KYOTO--Researchers here unearthed the stone foundations of a castle erected by 16th century warlord Toyotomi Hideyoshi that earned the moniker “fabled castle” because it was destroyed in an earthquake soon after its completion.

Historical documents that mention Shigetsu-Fushimi Castle (Shigetsu Castle), which was leveled by the Keicho Fushimi Earthquake in 1596, give virtually no clue to its location or structure.

Researchers at the Kyoto City Archaeological Research Institute unearthed an 18-meter-long ditch, foundations for stone walls and other artifacts during excavations in front of JR Momoyama Station in Kyoto’s Fushimi Ward.

Hideyoshi (1537-1598) started construction of Shigetsu Castle in 1592 as his retirement residence after he gifted his fortress and residence called Jurakudai to his nephew, Toyotomi Hidetsugu.

The structure was remodeled into a castle with stone walls in 1594 and completed by 1596, only to be destroyed by the earthquake that hit in that year.

The castle was reconstructed on nearby Mount Kohatayama (present-day Mount Momoyama). It is called Kohatayama-Fushimi Castle (Kohatayama Castle) to differentiate it from Shigetsu Castle.

After Hideyoshi’s death, Kohatayama Castle was destroyed in a fire during a siege leading up to the Battle of Sekigahara, the decisive conflict that ushered in the Tokugawa Shogunate founded by Tokugawa Ieyasu.

Although the castle was rebuilt yet again by Ieyasu, it was dismantled in 1623 following a decree by the shogunate that allowed only one castle to exist in each province.

The Kyoto City Archaeological Research Institute, along with other organizations, has been conducting excavations in the area since 1974.

In 2009, researchers unearthed a stone wall believed to have been part of Shigetsu Castle. Excavation work in 2015 revealed a stone wall and gilded tiles, which finally led researchers to conclude that the castle was actually built.

The city-run institute began its latest excavations covering a 400-square-meter area in August ahead of development work to create an open space in front of Momoyama Station.

The ditch that stretches 18 meters east to west, which is 1.5 meters wide and 0.7 meter deep, is cut off by the ruins of a stone wall that runs deeper than the trench north to south.

Based on artifacts excavated at the site, the remnants of the north-to-south stone wall are believed to be part of a residence of a daimyo warlord when Kohatayama Castle stood.

For those reasons, the institute concluded that the east-to-west ditch, as well as foundation stones, stone arrangements, gilded tiles and other artifacts discovered during the excavations, constitute part of the remains of Shigetsu Castle’s stone walls.

The site has since been backfilled.

“Generally speaking, stone walls are directly placed on the ground unless the ground is soft,” said Takao Minami, chief of the research division at the institute. “Stone walls for Shigetsu Castle were formed after the ground was dug, showing that it was carefully constructed.”

Minami noted that a letter sent by Hideyoshi to his retainers at the time of the construction of Shigetsu Castle, in which he apparently warns about the dangers of “namazu” (catfish), suggests that the warlord was keen to ensure the fortress would be quake-resistant.

The ruins of Shigetsu Castle’s stone walls lie further north of the location where the city’s cultural property protection division has assumed the castle stood.

“It has raised the possibility that Hideyoshi’s retirement residence and Shigetsu Castle were constructed apart from each other,” said Hitoshi Nakai, professor emeritus of the University of Shiga Prefecture specializing in the history of Japanese castles. “It is a significant finding that causes us to fundamentally review Shigetsu Castle.”