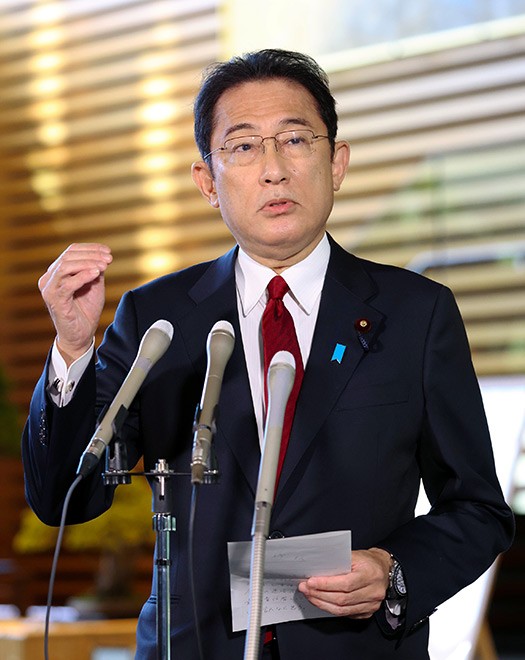 Prime Minister Fumio Kishida speaks with reporters on Dec. 3 about measures to deal with the Omicron variant. (Koichi Ueda)

A failure to communicate and routine bureaucratic procedure apparently led to the embarrassment and confusion over the government’s now-retracted request to airlines to stop taking reservations for international flights to Japan.

“There was a failure to share information,” Tetsuo Saito, the transport minister, told reporters on Dec. 2.

The ministry went ahead with the request to the airlines without informing officials in the prime minister’s office, the Foreign Ministry and even Saito himself, he said, apologizing for the confusion.

The cause of the problem can be traced back to the government’s decision on Nov. 29 to ban entry of all foreign nationals as a way to prevent a spread of the Omicron variant of the novel coronavirus.

On the same day, the government also decided to decrease the daily quota of arrivals in Japan from 5,000 passengers to 3,500.

But the specific steps to reduce the number were left up to transport ministry officials.

According to ministry sources, when the quota-reduction decision was made, many Japanese nationals abroad had already made plans to return home for the year-end holidays.

And some days in December had flight reservations approaching the 3,500-passenger figure.

So the ministry requested all airline companies on Nov. 29 to stop taking new reservations for flights to Japan.

The prime minister’s office was never informed of the request, and the transport ministry made no announcement because such requests to airline companies are made on a routine basis, according to officials.

“Until now, we have made specific requests to airline companies, so the (latest) one was made as part of routine clerical procedures,” a senior transport ministry official said.

However, past requests have generally covered about 10-day periods. The latest one was to remain in effect until the end of December.

And requests to all airline companies are unusual for the transport ministry.

When media reported on Dec. 1 about the request, Chief Cabinet Secretary Hirokazu Matsuno was clearly caught off guard at his daily news conference, and he could not immediately respond to questions about the measure.

Matsuno was only informed at the subsequent meeting of Cabinet ministers discussing entry restrictions.

Saito, the transport minister, was also told for the first time about the request by his subordinates after the meeting.

No report was made to Kishida until the evening of Dec. 1.

Foreign Ministry officials tasked with looking after Japanese nationals abroad were also not told about the no-reservation request.

Matsuno announced at his Dec. 2 morning news conference that the request was being retracted.

He was clearly displeased at the afternoon news conference the same day when he said, “I believe that in the future there will be thorough consultations beforehand.”

But another part of the problem may lie in efforts by the Kishida administration to move away from the practices of his two predecessors, Shinzo Abe and Yoshihide Suga, to have the prime minister’s office make all the policy decisions before ministry officials can do anything.

Speaking with reporters on Dec. 3, Kishida said, “I believe we will have to ask the public to act in a calm manner after making a more thorough explanation.”

Although the request has been retracted, the reduced daily quota on arrivals remains in place so some Japanese may experience difficulties in making reservations for flights in December.

While foreign nationals will likely have to cancel their flights to Japan, Japanese nationals may have to change their plans to find dates when reservations can be made.

(This article was written by Keishi Nishimura, Shinya Takagi and Satoshi Kimura.)