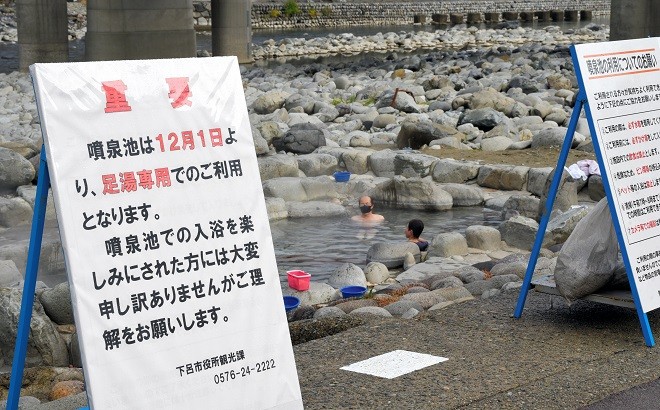 The Funsenchi open-air spa facility in Gero, Gifu Prefecture, which has recently become unavailable for bathers, is seen on Nov. 25. (Shuhei Yamashita)

GERO, Gifu Prefecture—Complaints about naked and unruly visitors have led to a ban on bathing, except for feet, at a popular open-air riverside hot spring facility here.

Gero city imposed the feet-only rule in December at the Funsenchi outdoor hot spring, part of the Gero resort, one of Japan’s three prominent spa zones.

“We will never abolish it (Funsenchi), as it is our traditional symbol,” said Gero Mayor Noboru Yamauchi. “We are going back to  its initial purpose of catering to sightseers.”

In 2010, the rule of donning swimsuits was introduced for security and privacy reasons, given that there are no fences around the bath to block views from the outside.

However, some visitors continued taking baths naked, according to the city’s accounts.

Others reportedly started quarrels and other problems over the “kakeyu” practice of dousing oneself with a bucket of hot water to cleanse the body before entering bathtubs.

Seeing no end to the complaints, the city limited the Funsenchi onsen only to clothed people who want to soak their feet in hot water.

Funsenchi, measuring 6.5 meters by 5 meters, sits along the Hidagawa river running through the Gero spa area. It uses spring water from the same source as nearby hotels and inns.

Gero city installed Funsenchi in 1983 to allow sightseers to bathe free of charge in the renowned resort.

Funsenchi has been inundated by many floods but has always been rebuilt for tourists and residents.

Although a countermeasure was once taken to shield bathers in Funsenchi from outside views, the city decided against erecting fences so that users could fully enjoy the open-air environment.

On the afternoon of Nov. 25, local residents and families packed Funsenchi. A 63-year-old visitor from Nagoya who travels to the onsen every year said the decision to restrict the use of the picturesque site was “really regrettable.”

Hideo Koike, 84, who lives in Gero, said he was involved in construction work at the onsen around 30 years ago and voluntarily cleaned the facility with acquaintances from outside Gifu Prefecture he got to know in Funsenchi.

He drops by Funsenchi four times a week to bathe for 30 minutes or so to rejuvenate from fatigue deriving from farming and other daily tasks.

He also said the new restrictions are regrettable but understands the city’s decision.

“I could live so long thanks to this hot spring water,” Koike said. “That (the bathing prohibition) is unavoidable in some respects because there are people who do not abide by the regulations.”

A sign erected by Gero city at the site calls for visitors to stick to the new rule.