VOX POPULI: Prince Shotoku a man for all seasons, and ordinary, too 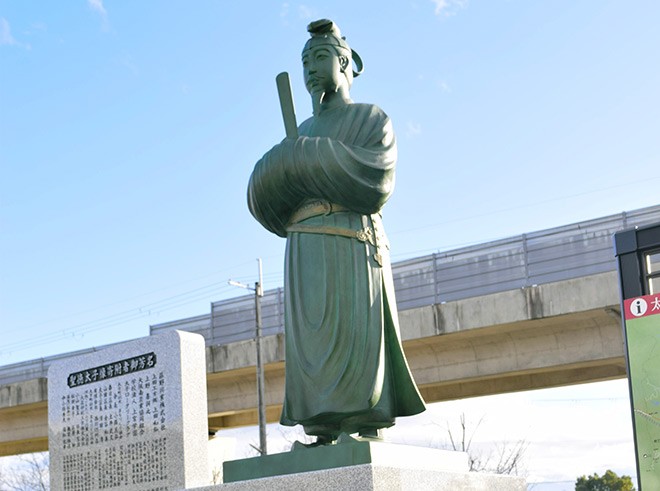 A statue of Prince Shotoku is unveiled in Habikino, Osaka Prefecture, in November ahead of the 1,400th anniversary of his death. (Asahi Shimbun file photo)

Next year marks the 1,400th anniversary of the death of Prince Umayado, better known as Prince Shotoku, who had at least four wives.

Anecdotes abound about this politician of the Asuka Period (592-710) who has been revered as a saint. But what was his private life like?

Back then, polygyny was common among men in positions of power.

Prince Shotoku’s spouses included a daughter and a granddaughter of Emperor Suiko as well as a daughter of Soga no Umako, a member of the powerful Soga clan.

Another consort, Kashiwade no Kisaki, does not appear to have resulted from a marriage of political convenience.

“She was a daughter of a not-so-influential provincial clan," said Yoshiyuki Aihara, 54, an associate professor of archeology at Nara University. “I presume that she was the love of the prince’s life.”

He even relocated to her hometown, and the two were eventually buried together, according to Aihara.

Legend has it that Prince Shotoku started talking the moment he was born and that he was also capable of listening to 10 people simultaneously.

While his talent has often been exaggerated, there is no question that he was a genius who helped build the foundations of Japan.

It was only fitting that his portraits have featured on bank notes seven times since the Showa Era (1926-1989).

But even the greatest of all great men was just another mortal human.

He agonized over diplomacy with China’s Sui Dynasty, the regional power. Domestic political strife must have taken its toll, too.

On top of all that, his marriages to the emperor’s daughter and granddaughter, plus the powerful clan’s daughter, must have put him under triple pressure, never giving him a moment’s rest.

While living with his most beloved wife, Prince Shotoku traveled over long distances to work in the capital, Asuka, in present-day Nara Prefecture.

When I walked the same route, I came across a stone where he was said to have rested.

Imagining him heaving a sigh while he sat here, I felt an instant sense of affinity.

This pious man, whose face is all too familiar from bank notes, felt like an anxious and tired “salaryman” goofing off at a train station.