Japan moves to tighten steps against the Omicron variant 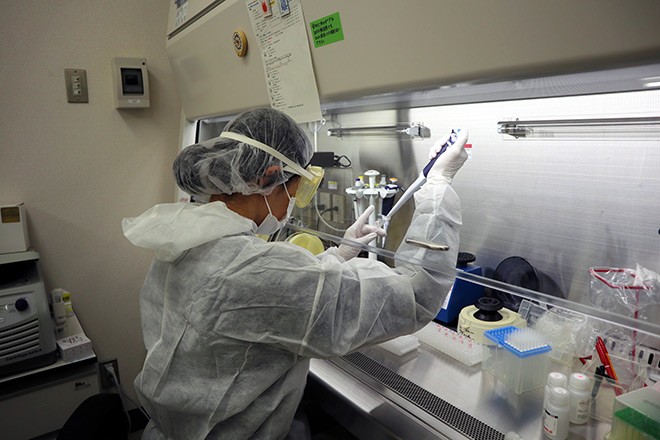 The government is ramping up efforts to guard against a spread of the Omicron coronavirus variant after making an embarrassing policy U-turn on international travel restrictions.

Along with monitoring for possible community transmission of the variant, steps are being taken to deal with any arriving passengers confirmed to be infected with the strain.

The health ministry issued a notice Dec. 2 to all local governments to request they closely monitor the situation in their jurisdictions for any indications of the emergence of the variant.

The monitoring will involve a test already in place to determine if the Delta variant is being transmitted through communities. The special polymerase chain reaction (PCR) test can detect the L452R variant, which includes the Delta strain. But as the Omicron variant is not in the L452R group, a negative test would raise suspicions that the infected individual may have the Omicron variant.

In that case, genome analysis will be required to confirm if the infection is due to the Omicron variant.

The National Institute of Infectious Diseases is working to develop a special screening test for the Omicron variant even as the Tokyo metropolitan government said it has come up with its own PCR test to determine if an individual has been infected with the Omicron variant.

Even with additional tests, a result can be obtained within one day of the first check, officials said.

The health ministry is also asking local governments to resort to genome analysis whenever possible. The procedure has been implemented on between five to 10 percent of residents confirmed with COVID-19.

The government has temporarily suspended entry of all foreign nationals to prevent a spread of the Omicron variant.

It also expanded the list of nations and regions of arriving Japanese nationals who would be required to self-quarantine at designated facilities because they have come from an area where Omicron variants have been confirmed.

Initially, the government called on airlines to stop accepting reservations for international flights to Japan for a one-month period, but immediately retracted the edict following an outcry from Japanese living overseas as well as companies with Japanese employees based abroad.

From Dec. 4, incoming passengers from California and the United Arab Emirates, for example, will be included in the self-quarantine measure.

Arriving passengers found with the Omicron variant will, in principle, be immediately hospitalized and placed in private, negative pressure rooms.

All passengers on the same flight as any individual confirmed with the Omicron variant will be considered to have been in close contact and asked to self-quarantine in a hotel and other accommodation facility.

So far, two individuals have been confirmed with the Omicron variant. They arrived from Namibia and Peru. Of the other 184 individuals on the same flights as those two, 146 were residents of Tokyo or its three neighboring prefectures.

Those considered to have been in close contact are given a PCR test once every two days, but as of Dec. 3 none had a positive result.

In light of the fact no one can be forced to enter an accommodation facility, some people have returned to their homes to self-isolate.

For example, of the 85 Tokyo residents asked to self-quarantine, 61 had entered accommodation facilities as of Dec. 2, while 18 were at home. The remaining six have still not settled on a location to self-quarantine. They are all having their health monitored either by the facility or a public health office.

The self-quarantine measure has led to concerns about a shortage of rooms at accommodation facilities.

Officials said 7,350 rooms have been secured near five international airports and there are plans to find an additional 2,000.

The rooms have also been used by arriving passengers from 17 nations and regions asked to self-quarantine for three days because those areas have high infection numbers of variants other than the Omicron one.

But effective midnight Dec. 3, arriving passengers from the 17 areas can self-quarantine at home if they have been vaccinated against COVID-19.

(This article was written by Yuki Edamatsu and Kayoko Sekiguchi.)