A rare visit inside the Atomic Bomb Dome on Dec. 3 shows the extent of the damage and the preservation work that has gone into keeping the structure standing. (Video footage by Jun Ueda) 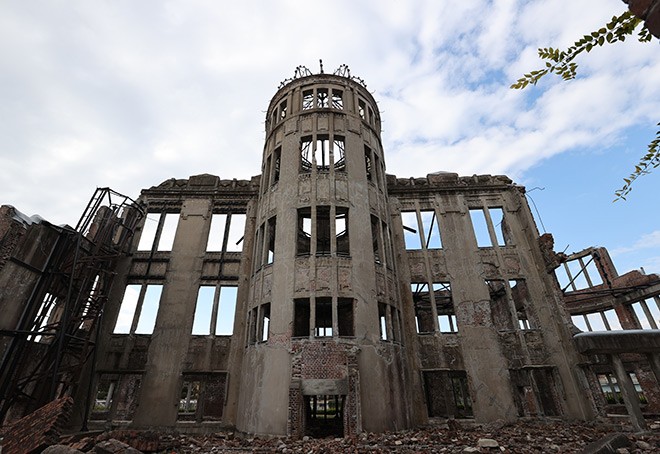 The Atomic Bomb Dome as seen from the grounds of the structure on Dec. 3 (Jun Ueda)

HIROSHIMA--A rare visit inside the symbolic Atomic Bomb Dome here is testimony not only to the extent of overall damage caused by the atomic explosion, but also the huge amount of work that has gone into ensuring the structure remains standing.

The three-story, Western-style brick building was called the Hiroshima Prefectural Commercial Exhibition Hall when it was completed in 1915.

The structure stands about 160 meters northwest of ground zero, where the atomic bomb detonated over the city on Aug. 6, 1945, killing thousands instantly, including all 30 or so people who were in the hall at the time.

Asahi Shimbun reporters visited the site on Dec. 3 after obtaining permission from the Hiroshima municipal government, which manages the structure. It is normally off-limits to the public.

Red bricks and other debris lie scattered in the grounds of the ruined structure, just as they were after the explosion.

Directly under what was once the dome is a web of steel frames installed in the intervening years to help the structure withstand the wind and earthquakes.

Only one-meter segments remain of what were once the two main pillars of the Atomic Bomb Dome. The domed roof rose to a height of 25 meters.

The atomic explosion blew off the roof, causing the collapse of the second and third floors. Heat from the blast destroyed much of the structure.

The Atomic Bomb Dome is now part of the Hiroshima Peace Memorial Park, but at one time the structure stood in the middle of a thriving commercial and residential area that was home to 400 or so households.

All that remains standing now is the Atomic Bomb Dome.

In the years soon after the war, some residents called for the structure to be torn down on grounds it brought back sad memories.

But in 1966 the Hiroshima municipal assembly passed a resolution calling for permanent preservation of the structure. Preservation work began the following year.

The fifth round of preservation work was completed this spring.

Dec. 7 will mark the 25th anniversary of the Atomic Bomb Dome being designated a UNESCO World Heritage site.