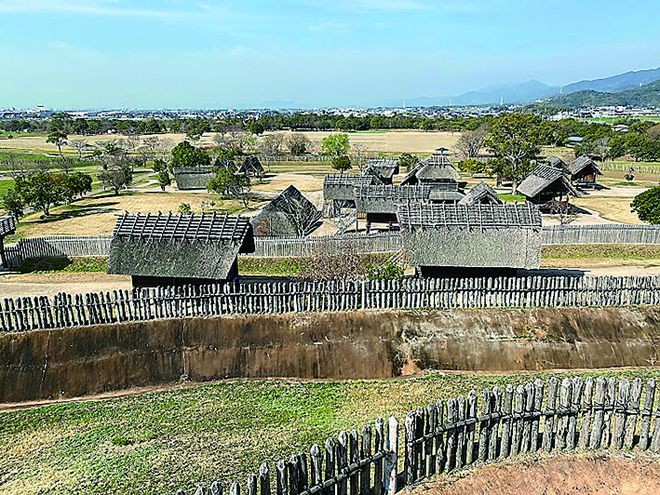 It’s 1986. “Dogan-shi-tato?” a manager at Yoshinogari in Saga Prefecture asks the guy who came running toward him, gasping for air.

“Sir, you won’t believe what we seemed to have unearthed! Are you ready for this? Please sit down. We ...We ... We may have discovered something huge!” The manager calmly replies, “Did you excavate some dinosaur bones?” “Sir, no. This land we’re standing on, right here at this moment, might be ... be ... the legendary Yamataikoku kingdom!”

Such were perhaps the words exchanged at a site initially slated to become an industrial housing complex.

Although the verdict is not yet out on whether it is indeed Yamataikoku, a mysterious country that is supposed to have existed within Japan around the second and third centuries, it’s still an impressive place. When I first heard of Yoshinogari, I had no idea of its scale and magnitude.

Situated in a spacious hilly area in the northeastern part of Saga Prefecture, the 117-hectare zone (a little bigger than Tokyo Disneyland and DisneySea) around the Yoshinogari Ruins has been designated a historical park.

The Yoshinogari Ruins is Japan’s largest dry moat-surrounded settlement of the Yayoi Period. Here is quick background refresher: The Yayoi Pottery Culture Period lasted approximately from 1000 B.C. to A.D. 250. It was the time when nomadic people started building permanent settlements and took up rice farming.

Upon entering one of the sites, I passed through a simple gate with statues of small wooden birds perched atop a slab and joked that this was a torii gate. No sooner had I uttered these words than a park staff seemingly out of nowhere came up to me and said in all seriousness that I was correct.

When I looked puzzled, he said that is indeed one of the etymologies of torii: a place where birds are. Birds were considered to be messengers from gods. Well, I’ll be!

The ancient settlement has been preserved and reconstructed. It consists of moats, watchtowers, residences, meeting spaces, storehouses, a cemetery and more. I was especially attracted to the Kita-naikaku (Northern inner enclosure), where important people prayed and communicated with ancestors and gods.

I loved the life-sized dolls in colorful attire sitting cross-legged on the floor in one section. In another, priestesses in all-white sat Japanese-style on their heels, receiving divine messages from another realm while holding sakaki evergreen branches.

Silkworms were raised and fabrics were woven. Sake was brewed for special occasions by women chewing on steamed rice to mix it with their saliva, which they then put into a pot to ferment.

It’s estimated that around 5,400 people lived here at one time. Human communities were here back then and are still here today. Perhaps the essentials haven’t changed all that much.

This article by Lisa Vogt, a Washington-born and Tokyo-based photographer, originally appeared in the Nov. 7 issue of Asahi Weekly. It is part of the series "Lisa’s Wanderings Around Japan," which depicts various places across the country through the perspective of the author, a professor at Meiji University.